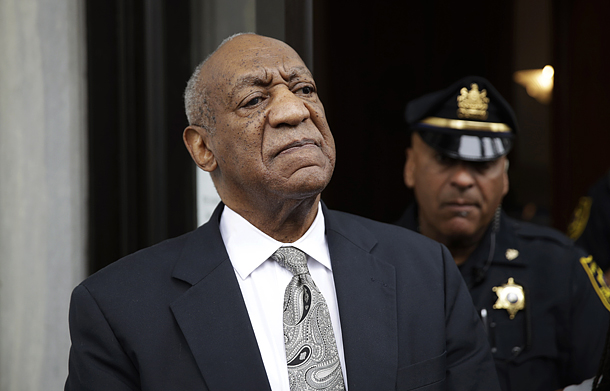 Bill Cosby exiting the Montgomery County Courthouse after a mistrial was declared in his sexual assault trial in Norristown, Pa. Cosby will organize a series of town hall meetings to help educate young people about problems their misbehavior could create. [AP]

LOS ANGELES - Bill Cosby will organize a series of town hall meetings to help educate young people about problems their misbehavior could create and other issues, a spokesman for Cosby said.

Cosby is eager to get back to work following a deadlocked jury and mistrial in his sexual assault case, spokesman Andrew Wyatt told Birmingham, Alabama, TV station WBRC on Wednesday.

“We’ll talk to young people. Because this is bigger than Bill Cosby. You know, this, this issue can affect any young person, especially young athletes of today,” Wyatt said. “And they need to know what they’re facing when they’re hanging out and partying, when they’re doing certain things they shouldn’t be doing.

“And it also affects married men,” Wyatt said, without elaborating.

“Is it kind of a, ‘Do as I say, not as I do’ situation?” the newscaster asked, but it was unclear if Wyatt heard and responded to the question.

Prosecutors have said Cosby will be retried on sexual assault charges stemming from former Temple University worker Andrea Constand’s allegations that Cosby drugged and molested her in 2004. Cosby contends the encounter was consensual.

“It would be more useful if Mr. Cosby would spend time talking with people about how not to commit sexual assault in the first place,” RAINN spokeswoman Jodi Omear said in a statement.

In a statement Thursday to The Associated Press, Wyatt expanded on his remarks.

He said that many civic organizations and churches have called asking that Cosby speak to young men and women about the judicial system and how it can be used for “personal agenda and political ambitions.”

“They feel that the young men and women need to be aware that Mr. Cosby was given a deal to never be criminally charged” in the Constand case, he said.

A town hall will be held in Birmingham in July, Wyatt said. He didn’t identify the date or location or any other cities that will be visited.

“Laws are changing,” Benson said on Thursday. “The statute of limitations for victims of sexual assault are being extended. So this is why people need to be educated on a brush against the shoulder, you know anything at this point can be considered sexual assault. And it’s … a good thing to be educated about the law.”

Lecturing isn’t new for Cosby. In recent years, the comedian and actor became known for scolding fellow African-Americans for poor grammar, sloppy dress and not valuing education, critiques that drew fire from some as elitist.

It also led indirectly to the reopening of the examination of his past.

During the trial, Constand testified that Cosby drugged and molested her at his suburban Philadelphia home in 2004. Cosby did not testify during the trial, but has said his contact with the former director of women’s basketball operations at his alma mater, Temple University, was consensual.