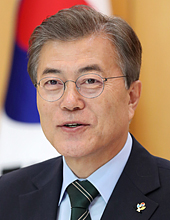 President Moon Jae-in’s comment Thursday that the deployment of a U.S.-operated antimissile system was mysteriously “accelerated” around the time of his taking office has angered the conservative opposition, which accuses the president of damaging relations with Washington.

In an interview with Reuters at the Blue House Thursday, Moon said the U.S. and South Korea initially agreed to deploy only one launcher for the Terminal High Altitude Area Defense (Thaad) system by the end of this year, and bring in five additional launchers next year.

“But for some reason that I do not know, this entire Thaad process was accelerated,” he was quoted as saying.

Moon’s Thursday remark was the first disclosure of the terms of the agreement reached by Seoul and Washington to deploy the Thaad antimissile system in Seongju, North Gyeongsang.

Moon was elected on May 9 and took office one day later.

On Friday, a Blue House official said the original plan to install a single launcher was revised for reasons not yet known and the two sides agreed to deploy two launchers by the end of this year and four additional ones next year. And then the revised plan was changed again. Four launchers were brought into the country with the presidential election just around the corner.

The Moon administration remained in the dark about the four Thaad launchers being brought in until late May, which prompted its probe into whether the Defense Ministry intentionally tried to keep it in the dark. (Some press reports mentioned four launchers at the time of the deployment, but they weren’t officially confirmed.) Following an initial probe, the Blue House announced on May 31 that the Defense Ministry “intentionally” failed to brief the presidential office about the four additional launchers. The Blue House quoted Moon as saying it was “very shocking” that the four launchers were in the country without his knowledge until late May.

The official, who spoke on the condition of anonymity, said the presidential office found out about the original agreement during its probe into the issue of the four Thaad launchers. “President Moon still does not know (what led to the change of plan),” said the official, who noted the Defense Ministry will find out why the deployment schedule was revised.

The four launchers are kept in a U.S. military camp in North Gyeongsang.

Moon’s remark sparked protest from the opposition Liberty Korea Party, which prides itself on advocating a strong U.S.-Korea alliance.

“I have no choice but to ask President Moon’s intention in making such a remark,” said LKP floor leader Chung Woo-taik during a party meeting at the National Assembly. “It is just highly inappropriate to reveal a highly classified matter of national security to a foreign reporter.”

Chung said Moon’s remark could bring about a “serious rift” in bilateral relations.