Some judges call on chief justice to resign

Some judges call on chief justice to resign 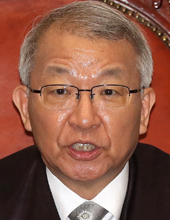 Judges are asking Supreme Court Chief Justice Yang Sung-tae to resign for his alleged involvement in the court’s attempts in March to stall judges from implementing judiciary reforms.

The Supreme Court’s National Court Administration is alleged to have abused its power by tweaking the results of a survey on the judges about the need for judiciary reform in March, and even creating a blacklist of judges who have openly called for such reforms.

The Supreme Court investigated the case in April, but did not investigate Chief Justice Yang and former head of the National Court Administration Ko Young-han, who are allegedly involved.

On Monday, 100 judges representing courts throughout the country gathered for a national meeting of judges and called for further investigation into the case.

As of Friday, there were six messages from judges on the internal website of the Supreme Court asking for Yang’s resignation, according to an official of the court.

This is the first time in nearly 30 years that judges have asked for a Supreme Court chief justice to resign.

The last was in 1988, when then-Chief Justice Kim Yong-cheol resigned after 430 judges demanded he resign over a corruption scandal in the Supreme Court.

“Yang is involved in a scandal worse than the scandal of 1988,” wrote a judge. “The chief justice must take responsibility and step down.”

“Yang is not responding to the decision of the national meeting of judges,” wrote another judge. “He should step down.”

But there were also posts that opposed the resignation of Yang.

“As soon as one message asking for Yang’s resignation surfaced on the website, one media outlet reported it immediately,” one judge wrote. “I’m suspicious that the said judge may have coordinated his moves with the media outlet.”

Some experts cautioned the judges from criticizing each other and forming cliques within the judiciary.

“If judges start to form groups and fight among themselves, people may lose trust in them,” said Jung Sang-yong, a professor of law at Dongguk University in central Seoul. “I don’t think we should expect revolutionary reform in the judiciary.”

A civic group sued eight members of the judiciary, including Yang and Ko, on June 15 for obstruction of public duty by creating a blacklist of judges.

The prosecution is investigating.