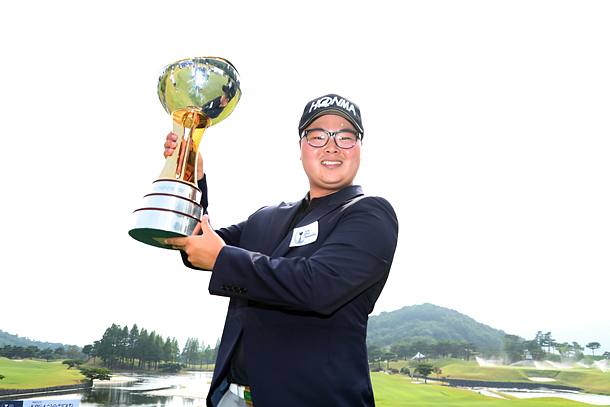 Hwang Jung-gon poses with his trophy after winning the 60th KPGA Championship at A-One Country Club in Yangsan on Sunday. Hwang became the first KPGA player to earn an exemption to the CJ Cup @Nine Bridges, the first PGA tour played in Korea in October. [KPGA/YONHAP]

Hwang, who started tied for fourth at 15 under-par was off to a slow start, with a bogey and a birdie to stay at even-par for the day. But with an eagle, making a 10 meter (33 foot) putt after hitting the green in two on the ninth, Hwang quickly got himself in the lead along with six others.

Heading into the back nine, Lee Hyung-joon also made his move up the leaderboard by making four consecutive birdies from the 12th to get to 21 under-par. Lee faced trouble on the 16th, hitting his tee shot out of bounds, but managed to hit his fourth shot as close as 1.5 meters from the pin to save it as a bogey.

A bogey was a great save for Lee, but for Hwang, it was an opportunity. On the 17th, Hwang made a birdie and tied the lead with Lee at 20 under-par. Then, as Lee three-putted on the last hole, Hwang took a sole lead for the first time after the final round. Since the players in the last group all struggled in their final round, Hwang was declared this year’s winner of the KPGA Championship.

“I wasn’t playing too well in the morning so I set my goal to finish within the top-five,” Hwang said after the round. “I think the eagle on the ninth was definitely the turning point in my round.”

Looking at his final round, Hwang made an eagle, four birdies and a bogey to finish one shot ahead of the runner-up finishers, Lee and Kim Gi-hwan. This marks Hwang’s first victory since the 2014 Maeil Dairies Open and his second career victory on the KPGA tour. And along with the victory, Hwang has now become the first KPGA tour player to earn an exemption onto the PGA tour’s CJ Cup @Nine Bridges, the first PGA tour event to be played in Korea, and is given five year seed on the KPGA tour.

Rather than starting his career in Korea, Hwang started his professional career on the Japan Golf Tour (JGTO) in 2011, where he finished fifth in JGTO’s qualifying school in 2010.

He became known in Japan by winning the Gateway to the Open Mizuno Open in 2011 in his first year. Hwang was given an invitation to play in The Open that same year, where he received a great amount of attention by the Korean fans after tying for sixth place in the first round.

Though he finished tied for 71st by the end of the tournament, the first round was enough for Hwang to leave a significant impact on fans.

Following his victory, Hwang continued his success in the Japanese tour by winning the Casio World Open in 2012 and in 2015.

Lee Dong-ha, who had a one-shot lead prior to the final round, ended up finishing tied for 20th by shooting 77, five over par on the last day.