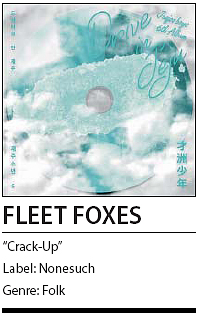 Produced by leader Robin Pecknold and Skyler Skjelset, who appears on all 11 tracks but one, the band’s third album isn’t far removed from 2011 predecessor “Helplessness Blues,” although the shades are more varied here, the hues deeper, the in-song transitions multiplied, the themes wider and the arrangements both more precious and adventurous.

Some musical and lyrical references may seem taken from an updated “Rock Snob’s Dictionary” - Igor Stravinsky, Beowulf and F. Scott Fitzgerald - but they are at the service of the songs, not the other way around.

Current events also have their place and the title cut and album closer reacts to the fake news phenomena - “When the world insists that the false is so” - while “If You Need To, Keep Time on Me” asks “Who knows what State is in store?”

The array of instruments beyond the horns and strings is so extensive that you feel some elements more than hear them.