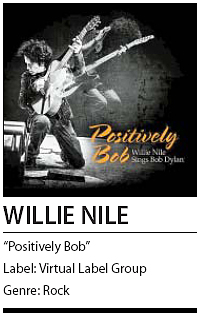 There are some analogies between Willie Nile and Bob Dylan, like their early career moves to Greenwich Village, extended layoffs (Dylan’s motorcycle accident, Nile’s record company torments) and decades of excellent songwriting.

“Positively Bob” took shape after a tribute concert for Dylan’s 75th birthday where Nile’s performances of “Love Minus Zero/No Limit,” “A Hard Rain’s A-Gonna Fall” and others were not only clear winners with the audience but also rekindled his appreciation for the Nobel Prize winner’s oeuvre.

“Subterranean Homesick Blues” acquires a rockabilly identity and a rendering of “Abandoned Love,” another of those legendary tunes Dylan kept in the vaults for years, brings some well-deserved attention to a rarely versioned classic originally meant for 1976’s “Desire.”