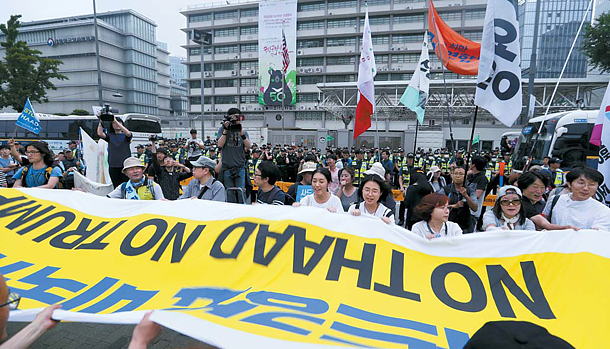 The U.S. Embassy in central Seoul was, for the first time in Korean history, briefly surrounded by protesters on Saturday afternoon, as they demanded the withdrawal of the U.S. military’s advanced antimissile system, deployed in the country earlier this year.

The protest against the Terminal High Altitude Area Defense (Thaad) system was the first major anti-U.S. rally since President Moon Jae-in took office in May. The event also came on the eve of Moon’s trip to Washington this week to hold his first summit with U.S. President Donald Trump.

About 90 groups, including the Korean Confederation of Trade Unions and People’s Solidarity for Participatory Democracy, participated in the rally, while police maintained a minimum level of security. According to the organizer, about 3,000 protesters took part.

The protesters demanded that the upcoming summit be an opportunity for the two leaders to reconsider the Thaad deployment.

Despite Beijing’s fierce protest the powerful radar system threatens its security, Seoul and Washington agreed on the deployment in July last year to deter Pyongyang’s escalating nuclear and missile threats.

Less than two weeks before the May 9 election that brought Moon to power, key components of the unit, including a radar system and two missile launchers, were installed in the rural town of Seongju, North Gyeongsang. Four launchers also arrived in Korea and are waiting to be deployed before the end of this year.

Over the past weeks, Moon made a series of moves that will effectively delay the deployment, such as ordering a proper environmental study. He made it clear that he has no intention of defying the agreement made by his predecessor, but wants to follow due process. The protesters started their street march toward the U.S. Embassy at 5:20 p.m. and arrived there in one hour. The protesters created a human chain by holding hands and surrounded the embassy compound.

After 19 minutes, the protesters ended the chain in order to respect a local court’s permit for the march toward the U.S. Embassy. Last week, protesters asked police to allow them to march on the roads both in front of and behind of the embassy compound. The police, however, did not give permission to march on the road behind the embassy, as this would allow protesters to completely surround the diplomatic mission. The protesters challenged the decision and took the case to the Seoul Administrative Court. The court on Friday issued a ruling allowing the march with the condition that the protesters must pass through the road behind the embassy building within 20 minutes.

According to police, protesters surrounded the embassy at 6:32 p.m. and stopped at 6:51 p.m. The embassy was surrounded for exactly 19 minutes.