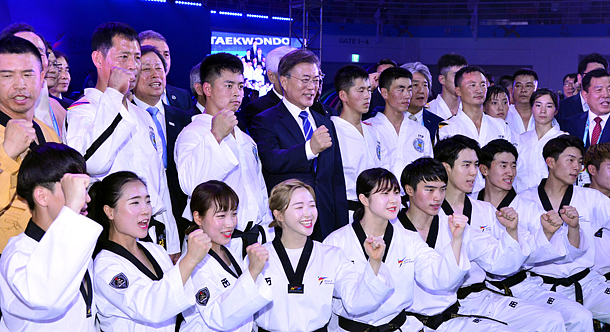 President Moon Jae-in renewed calls for warmer ties with Pyongyang in his remarks at the World Taekwondo Championships in Muju County, North Jeolla on Saturday, inviting North Korea to participate in the PyeongChang Winter Olympics next year to “fulfill the Olympic spirit of harmony and promote world peace.”

Among members of the delegation were Ri Yong-son, president of ITF, and Chang Ung, former ITF chief and the only North Korean member on the International Olympic Committee (IOC). While welcoming the North Korean taekwondo team, Moon said he was “delighted” to have accomplished the first “inter-Korean sports cooperation” in his administration, adding that he hopes the ITF and World Taekwondo help bring peace to the Korean Peninsula.

Without mentioning North Korea’s weapons program or the recent death of Otto Warmbier, the American student who died last week shortly after his release from the North, Moon went further to suggest the two Koreas form a united team in the upcoming PyeongChang Winter Olympics and walk side by side during the opening ceremony.

“The South Korean government will do whatever it can” for that goal, Moon said, while calling on the IOC and Chang for support for the initiative.

The two Koreas made a joint entrance in the 2000 Summer Sydney Olympics but never formed a united team for the global sporting event. Do Jong-hwan, South Korea’s newly appointed sports minister, said last week he would ask Chang for his support in securing North Korea’s participation in the PyeongChang Olympics, which kicks off in February 2018.

Do also vowed to push for a united team in women’s hockey. North Korea has not made any known remarks on its decision yet.

Ri Yong-son, president of ITF, said last Friday at the Gimpo airport that the delegation’s reason for coming to South Korea was to seek “unified improvement in taekwondo” and contribute to better inter-Korean ties.

After a round of Taekwondo demonstrations, the team is expected to leave South Korea this Saturday.

Providing a stark example of Moon’s two-track approach on the North, in which the administration said it would criticize Pyongyang’s weapons program while trying to engage in dialogue and cooperation in the private sector, South Korea’s Prime Minister Lee Nak-yon spared no time to denounce the regime Sunday during his remarks in a local ceremony celebrating the 67th anniversary of the break of the Korean War.

“The sounds of gunfire ended on July 27, 1953,” said Lee, “but the Korean War has yet to come to an end. Until recently, North Korea has continued its firing of ballistic missiles and is ceaselessly engaging in military provocation.”

Lee urged North Korea to denuclearize and follow inter-Korean declarations of peace and prosperity. He also mentioned the death of Otto Warmbier, saying the “international community is outraged over the incident.”

Lee refrained from explicitly blaming North Korea for the American’s death, but pressed the regime to release the six South Korean nationals and three American citizens held captive there. North Korea flatly rejected Lee’s call through an editorial released Sunday in the state-run newspaper Rodong Sinmun, reiterating its warning that South Korea needed to distance itself from the United States if the country truly wanted to improve ties.

Last Friday, in its first official response to the Warmbier case, North Korea claimed innocence through its Korean Central News Agency (KCNA) and accused the U.S. of leading an “anti-DPRK smear campaign by abusing the humanitarian measure” of its country, using the acronyms for its official name, the Democratic People’s Republic of Korea.

“We are the biggest victim of this incident,” said the statement, which was issued by an unidentified spokesman for North Korea’s Foreign Ministry. The North said it “provided [Warmbier] with medical treatments and care with all sincerity on humanitarian basis,” and that his health condition was “normal” at the time of his release.