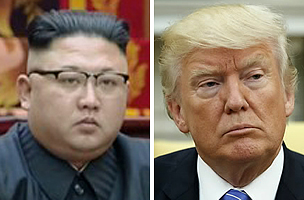 North Korea has always tried to improve relations with the United States. It’s been that way since the end of the 1950-53 Korean War.

This could seem ironic considering North Korea’s constant threats to fire a nuclear intercontinental ballistic missile (ICBM) at the U.S. mainland, its taking American citizens hostage or the recent death of Otto Warmbier, a 22-year-old student at the University of Virginia, who died six days upon his release from the North in a vegetative state.

But throughout the leaderships of Kim Il Sung, Kim Jong-il and the current Kim Jong-un, Pyongyang has always set as a priority establishing diplomatic ties with Washington and signing a permanent peace treaty that would replace the armistice and formally end the Korean War.

Behind all North Korea’s saber-rattling is the fear that the United States might make a pre-emptive strike against the regime. The Kim dynasty’s reaction to that was developing its own defense. But Washington has rebuffed the idea of a peace treaty in the past unless Pyongyang fully denuclearizes, which the Kims have insisted will never happen.

In a closed-door briefing with South Korean lawmakers on the National Assembly’s Intelligence Committee earlier this month, South Korea’s intelligence chief said Kim Jong-un was “obsessed” with collecting information on South Korean-U.S. efforts to remove him from power. The Supreme Guard Command, which is specifically tasked to bodyguard the Kim family, is said to have gained clout over the past few years due to this anxiety.

So what exactly led the Kims to feel so uneasy about their own safety?

The answer lies in the 1989 invasion of Panama by the United States, when the George H. W. Bush administration decided to depose its de facto leader, Manuel Noriega, and bring him back to the United States to stand trial for charges of drug trafficking and money laundering. Noriega was slapped with 40 years in prison. The sentence was later reduced by 10 years.

Bush’s justification for the invasion was mainly to combat drug trafficking, protect the lives of U.S. citizens there and defend Panama’s democracy and human rights. But for North Korea, it was more personal than that. It was a wake-up call that it, too, could be invaded by the United States and that Washington was not afraid to arrest the leader of another country.

Another big reason the North wants to normalize ties with America is to economically open borders like China. One of the first things Deng Xiaoping did in his drive of market-economy reforms was to establish formal diplomatic relations with the United States. Pyongyang knows only too well that having Washington on its side is a sure guarantee for national security and a solid standing in international finance.

North Korea spends at least 15.8 percent of its annual budget on the military, compared with South Korea’s 10 percent. The Kim leadership believes that the establishment of diplomatic ties with Washington will help its country focus more on its economy and fill state coffers.

The greatest obstacle to improving ties with the world power is none other than North Korea’s nuclear weapons. As U.S. Secretary of State Rex Tillerson put it several times this year, diplomatic and other efforts over the past 20 years to get North Korea to denuclearize have failed.

North Korea has flatly rejected this strategy and stressed there is to be no turning back of its nuclear program. On June 10, it reiterated its threat to test-launch an ICBM, saying the test will be held “any time” Kim Jong-un wishes and that “nothing can ever” block its weapons development program.

But for the country to physically carry out that threat is a different issue. If North Korea does test an ICBM, the United States would have some justification to pre-emptively strike the regime - which is why Pyongyang will likely fall short of actually conducting the test, while trying to seek dialogue with Washington.

And the chances were all there when Choe Son-hui, director general of North American affairs at North Korea’s Foreign Ministry, said the regime would talk to the Trump administration “if the conditions were right.” Choe, who made the remark last month while talking to reporters at Beijing Capital International Airport, did not specify what preconditions Pyongyang had in mind. She was returning from Oslo, the capital of Norway, with a North Korean delegation after holding talks with former U.S. officials there for the so-called Track 1.5, or semi-governmental, semi-private discussions.

Former NBA star Dennis Rodman made a surprise visit to Pyongyang two weeks ago, raising hopes even more, though Rodman said his trip, the fifth to North Korea, had nothing to do with the White House.

But the Trump administration had stressed that talks can only occur if the North completely denuclearizes. The possibility of a first meeting between Trump and Kim fizzled with the recent death of Otto Warmbier, an American detainee who was slapped with 15 years of hard labor for attempting to steal a propaganda banner from a restricted area within his hotel in Pyongyang. Warmbier died on June 19 in Cincinnati, Ohio, six days after he was released from the North in a state which American doctors described as “unresponsive wakefulness.”

In a White House press briefing last Tuesday, one day after Warmbier died, press secretary Sean Spicer was asked whether Trump was still open to talks with Kim. Spicer responded that the administration was “clearly moving further away” from direct engagement.

North Korea’s preference of a liberal government, which in South Korea often links to more engagement, doesn’t necessarily apply to America. It has had a bad history with the Democrats, from the 1950-53 Korean War during Harry S. Truman’s presidency and the 1968 Pueblo crisis, while Lyndon B. Johnson was in office, to Bill Clinton nearly bombing North Korea’s Yongbyon nuclear facility in 1994. George W. Bush, a Republican, did refer to North Korea as part of the “Axis of Evil,” but at least he set the ground for the six party talks, which also involved South Korea, Russia, Japan and China.