Choo and Oh continue to impress their fans

Choo and Oh continue to impress their fans 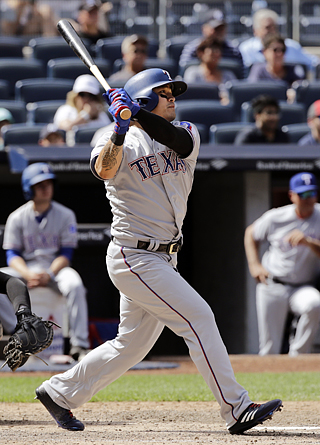 Choo Shin-soo of the Texas Rangers during the game against the New York Yankees. [AP/YONHAP]

The Korean major leaguers continued to thrill spectators on Sunday.

Choo Shin-soo of the Texas Rangers hit his 12th home run of the season during the game against the New York Yankees at Yankee Stadium on Sunday to help the Rangers to a 7-6 victory.

Choo appeared as the Rangers second batter and right fielder, and recorded, in one at-bat, a home run scoring three runs. While the Rangers were leading 3-0 at the top of the second, Choo hit Michael Pineda’s slider over the right fence for a three-run home run, doubling the Rangers lead to 6-0. Choo’s hit went 111.86 meters (122 yards).

Choo continued to record hits and get on base for his 19th consecutive game, and his batting average increased from 0.256 to 0.257. Choo also showed great defense throughout the game, and recorded his third assist of the season. 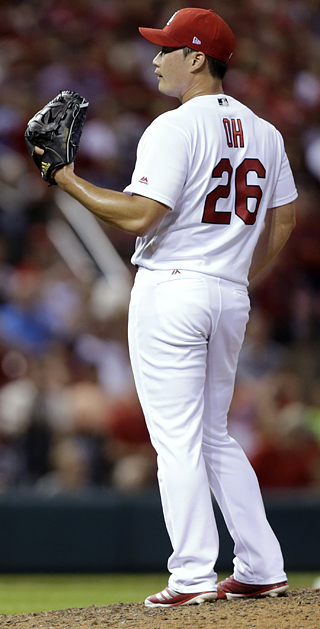 Oh Seung-hwan, closer for the Saint Louis Cardinals, during the game against the Pittsburgh Pirates. [AP/YONHAP]

Looking at Choo’s home runs this season, having played a total of 66 games as of Sunday, local time, he is at a similar pace as when he recorded his career high of 22 home runs during the 2010 and 2015 season. Coming off a fracture in his left forearm from the 2016 season, which led him to miss the season from August, Choo is having another great year.

With their victory, the Rangers concluded the three-game series against the Yankees with two wins and one loss.

Meanwhile, Oh Seung-hwan of the Saint Louis Cardinals pitched a perfect ninth inning to defeat the Pittsburgh Pirates 8-4 at Busch Stadium in St. Louis, Missouri on Sunday. The Cardinals thus finally got themselves out of a three-game losing streak and concluded the series against the Pirates with one win and two loses.

Oh got on the mound while the Cardinals were leading 8-4 and struck out all three batters to redeem himself from Friday’s game against the Pirates. With that, Oh lowered his ERA from 3.71 to 3.60 for the season.

Prior to Sunday’s game, Oh appeared on Friday, where he recorded his fourth loss of the season by allowing a home run.

For many, it was great to see Oh pick up another save, as he gave up a run in four of the seven games he played as the Cardinals’ closer in the month of June.

On Thursday, Ryu Hyun-jin of the Los Angeles Dodgers will be given another shot at picking up his fourth win of the season against the LA Angels.

Since Kenta Maeda, whom Ryu is competing against for a spot in the Dodgers’ pitching rotation, will be the starting pitcher on Wednesday’s game, Ryu will be given another day of rest.