Ryu So-yeon is now No.1 golfer

Ryu So-yeon is now No.1 golfer 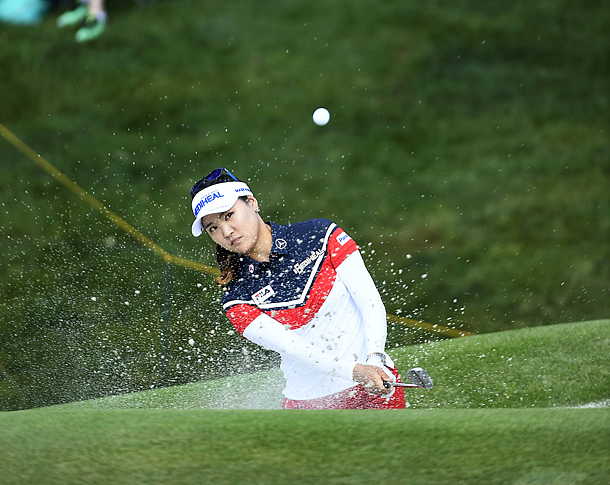 Ryu So-yeon during the final round of the Walmart NW Arkansas Championship presented by P&G in Arkansas on Sunday. With Ryu’s victory at 18 under-par, she became the new No. 1 ranked golfer in the World. [AP/YONHAP]

Prior to the start of the 2017 season, Ryu So-yeon stated that her goal for the season was to become the world’s No. 1 golfer.

For the past two years, she was one of the most consistent players on the tour, ranked within the top ten most of the time, but never had much luck when it came to winning a tournament.

Even Ryu’s victory at the ANA Inspiration in April was, by many, chalked up to luck rather than skill.

But this time, with a victory at the Walmart NW Arkansas Championship presented by P&G in Arkansas on Sunday, she has finally fulfilled her dream of becoming the world’s top golfer and proved that it wasn’t just luck in April.

Only a week after Ariya Jutanugarn of Thailand became No. 1, Ryu made another shift in the world ranking by becoming the new world’s No. 1. Previously, while Jutanugarn and Ko were competing for the No.1 spot, Ryu had a shot at No. 1, but started to play poorly, finishing tied for 56th at the LPGA Volvik Championship and missing the cut for the first time since the 2014 Reignwood Classic. She took two weeks off and, evidently, the break benefitted her significantly.

“First of all, I really want to thank everyone who has been supportive of me to make me the No. 1 player in the world,” Ryu said as quoted on the LPGA website. “That’s finally made my dream come true.”

She set a new tournament record of 61 on the second round, and started her final round with a five shot lead ahead of Amy Yang.

Though Ryu didn’t make as many birdies as she did from the first two rounds, she managed to play another consistent round, making only one bogey and three birdies, shooting another under-par round.

Yang’s third round was similarly impressive, as she was only two shots behind Ryu after the 12th hole, par-four. But with Yang’s back-to-back bogeys on the following hole, she went back to being four shots behind Ryu and finished tied for runner-up with Moriya Jutanugarn of Thailand by making three birdies on the four remaining holes.

Throughout the weekend, Ryu made a total of 19 birdies and only one bogey, made during the final round. Following Ryu’s tournament record, with her victory, Ryu set another tournament record at 18 under-par, which was previously set by Lydia Ko last year at 17 under-par.

Two seasons of the LPGA tour without a victory is finally paying off for Ryu this season, as she became the first multi-winner of the season.

Though Ryu won as many as five tournaments in a single season while playing on the KLPGA tour, this is her first time winning more than one tournament in a season on the LPGA tour.

“Dreams come true,” Ryu said as quoted on the LPGA website. “I always dreamed about it. I cannot believe it. I didn’t expect two good things coming together.”

Though a lot of the Korean golfers had been dominating the world ranking, Ryu is only the third Korean golfer to top the Rolex World Ranking on the LPGA tour, after Shin Ji-yai and Park In-bee.

Ryu will be playing her first tournament as the world’s No. 1 golfer at the KPGA women’s PGA Championship starting on Thursday.

“This is going to be my first week as the No. 1 player in the world,” Ryu said as quoted on the LPGA website. “I know it’s going be a lot of pressure and I know I can handle a lot of different things.”