Diesel prices will not be increased

Diesel prices will not be increased 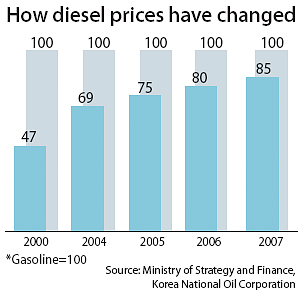 The Ministry of Strategy and Finance on Monday announced it will not be raising diesel prices as it believes such a move will have little impact on air pollution.

Diesel prices have remained at 85 percent of gasoline prices since 2007, and next month state-run research institutions - the Korea institute of Public Finance, Korea Environment Institute, Korea Transport Institute and the Korea Energy Economic Institute - were expected to release a study in favor of raising diesel prices.

The study was commissioned in June 2016 by the Ministry of Strategy and Finance to help curb fine-dust air pollution.

“Although the study for the public hearing has not been confirmed, it turns out the effectiveness of raising diesel prices would be low,” said Deputy Finance Minister on Tax and Custom Choi Young-rok on Monday. “Overseas contribution to fine dust is relatively large, fuel consumption is inelastic to changes in prices and there are vehicles that receive fuel subsidies that are not affected by the taxation adjustment.”

According to the Korea National Oil Corporation, as of Sunday the price of gasoline was 1,450 won per liter ($4.80 per gallon).

During a public discussion over reforming energy taxes at the National Assembly held earlier this month, a Finance Minister official from the environment and energy tax division raised the issue that the tax on diesel prices in Korea is lower when compared to the average of OECD member countries.

But some have cautioned the government from raising diesel prices. First, the institutions’ study has to prove that diesel fuel is one of the major causes of air pollution, which cannot be done in a short period of time.

Also, the government has to consider the financial burden that will be imposed on lower income families, especially those whose livelihoods depend on diesel-fueled trucks.

Currently, there are 3.3 million diesel-powered trucks and only 11.4 percent, or 380,000 trucks, receive government fuel subsidies. Raising the cost of diesel by 10 percent will increase the average monthly fuel spending of the other 88.6 percent, or 2.95 million trucks, by 18.1 billion won.

Over the years, the government has raised the price of diesel compared to gasoline. In 2000, the cost of diesel was only 47 percent of the cost of gasoline, but the cost was raised to 85 percent in 2007, which has sparked complaints.

Some argue that raising the cost of diesel will discourage people from driving diesel-fueled vehicles, while others point out that smokers were not discouraged when the government raised the tax on cigarettes.