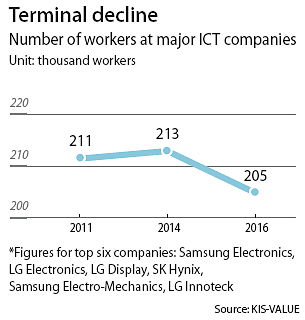 Some regions in Korea are hearing a giant sucking sound as information and communications technology companies continue to move their manufacturing overseas.

“Korean ICT companies have been expanding overseas production since the mid 2000’s [mainly in Asian countries such as China and Vietnam] to cut costs and stimulate exports,” wrote Kang Ki-woo, a director in the office of regional coordination at the Bank of Korea, in the BOK Regional Economic Report released Monday. “As a result, as of 2015, the portion of overseas production for Korean ICT companies is at 79.3 percent, much higher than Japan’s 30.7 percent [as of 2014].”

The report said steady offshoring of manufacturing for ICT products, which include semiconductors and displays, will hit certain regions particularly hard. Gyeonggi and North Gyeongsang are very reliant on the ICT industry and its jobs. But Gyeonggi is less affected, as it focuses on research and development. North Gyeongsang is much more dependent on factory jobs.

“The changes in the industry structure had a more dire impact on North Gyeongsang in comparison to Gyeonggi,” explained the report. “This is because the growth of the region was driven by assembly plants for finished ICT products such as computers and mobile phones.”