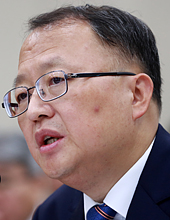 The National Tax Service is investigating the hidden wealth of President Park Geun-hye long-time friend and co-defendant Choi Soon-sil, according to Han Seung-hee, the nominated head of the agency, at a confirmation hearing at the National Assembly Monday.

“The tax investigation is following the law and its principles,” Han said when asked whether the move has a political motive. “Other than for taxation purpose, we cannot conduct a tax investigation.”

When lawmakers commented that there have been many cases in which wealth and inheritances have been illegally transferred using public institutions, Han said the tax agency is monitoring constantly whether such institutions are abiding by tax laws.

Choi has been accused of using President Park to force leading conglomerates including Samsung Electronics and Hyundai Motor to fund two public institutions: the Mi-R and K-Sports foundations.

It has been suspected that the foundations were created to launder an inheritance for Choi’s daughter Chung Yoo-ra.

During the hearing, Han said he will focus on creating an environment that will encourage taxpayers to voluntarily report the taxes they owe the government rather than forcing them through tax investigations.

He said that considering the current, unfavorable economic situation, the tax agency will maintain the level of its tax audits at 17,000 cases a year.

He said he will raise the convenience of paying taxes by adopting the latest technologies.

“We will provide information data on various ways of reporting through scientific methods such as big data analysis,” Han said. “We will try to raise voluntary reports by securing convenient services so that taxpayers can actually feel the difference.”

But the nominee made it clear that this does not mean that the tax agency will be lenient toward tax evasion.

“I will certainly right any form of tax evasion including illegal inheritances by conglomerate-controlling families or the top wealthiest, illegal transfer of corporate capital outside the country as well as offshore tax evasion,” Han said. “We will implement tough regulations including disclosing the names of tax evaders that owe the government huge amounts.”