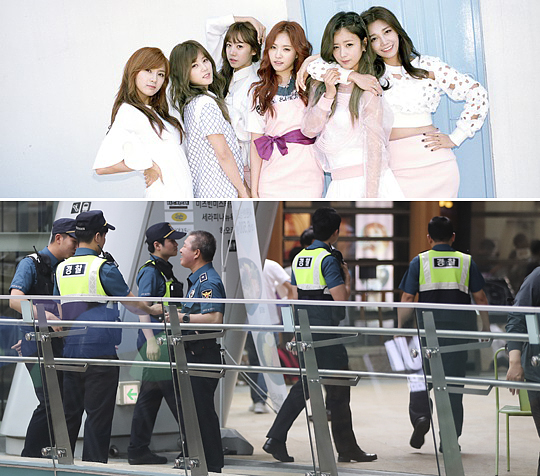 Police heightened security at a media showcase for K-pop band Apink on Monday after an unidentified man threatened to bomb the event.

“A man with the same voice as the person who threatened to kill (the group’s members) called the office at 11:30 a.m., claiming to have set up explosives at the showcase venue,” a representative at Plan A Entertainment said.

Police later conducted a sweeping search of the Shinhan FAN Square hall, the venue for the showcase, in western Seoul but found no evidence or trace of explosives, according to Plan A.

Despite the threat, the company decided to go ahead with the event after having been reassured by law enforcement of the safety. A company representative also said that the man called Plan A’s office two days ago and threatened to shoot down the members with a firearm.

According to the company, about 15 to 20 security guards and police officers were on standby at the venue in the case of an emergency.

The caller, whose identity remains unknown, is believed to be the same person who made a phone call to the police on June 14, threatening to kill Apink members. Apink is scheduled to release its sixth EP album “Pink Up” later in the day.

Having debuted in 2011 with their first EP album “Seven Springs of Apink,” the six-member team is best known for such hit songs as “Mr. Chu,” “NoNoNo” and “LUV.”