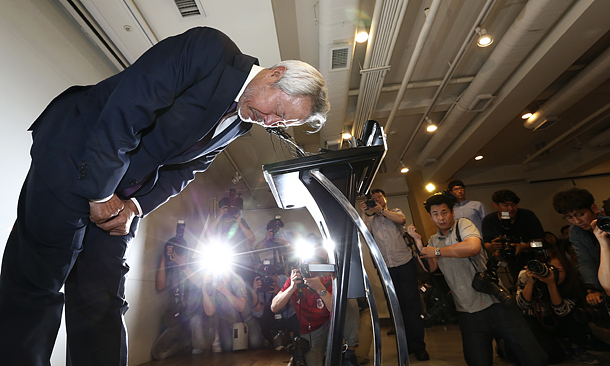 Jung Woo-hyun, MP Group chair and Mr. Pizza founder, apologizes at a press conference held Monday at the company’s headquarters in Seocho, southern Seoul. On the same day, he resigned from his post and prosecutors banned him from traveling abroad. [LIM HYUN-DONG]

Jung Woo-hyun, chairman of MP Group and founder of Mr. Pizza, resigned on Monday over a malpractice scandal involving franchisees.

Mr. Pizza is one of the top five pizza brands in Korea. The group has recently been raided by the prosecution for violating fair trade law.

“I feel responsibility for the inspection and controversies that recently arose regarding the company’s management,” said Jung at a press release held at MP Group’s headquarters in Seocho, southern Seoul, on Monday. “As of today, I will resign from the group’s chair and hand over Mr. Pizza’s management to CEO Choi Byeong-min.”

On Wednesday, prosecutors investigated MP Group’s headquarters and two partner companies on charges that the pizza brand supplied cheese from a separate company owned by the chairman’s family, which ultimately made the stores buy the product at a higher price.

Whereas 10 kilograms (22 pounds) of cheese can be bought for 70,000 won, the partner linked to Jung sold it for 87,000 won. One of Mr. Pizza’s two raided cheese suppliers is owned by Jung’s brother. Franchisees were not allowed to purchase from other suppliers.

Jung also said he would immediately close down two stores that created controversy by taking revenge on former franchisees. After two franchisees withdrew from Mr. Pizza, the company established two directly managed stores nearby. The Mr. Pizza branches sold pizza at a lower price and offered other benefits like chicken at a half price or pork cutlets for free, which dealt a critical blow to the former franchisees. One of the former franchisees committed suicide in March. Prosecutors are also looking into the issue.

“The company will organize a committee of industry specialists, consumers and branches to devise a detailed management reform plan,” said Jung. The conflict between Mr. Pizza’s headquarters and franchisees surfaced last year when a group of franchise owners formed a group in October to oppose Mr. Pizza’s unfair treatment.

Last April, Jung was criticized by the public for private issues, as well, when a janitor reported him to police for assault. Jung was at a Mr. Pizza branch in a building of which the janitor had locked the front door at 10 p.m., which he was required to do. He was attacked by Jung, who was drunk at the time, for locking the door. The incident was filmed by CCTV nearby.

Having started his career as a textile wholesaler in Dongdaemun market, Jung was a legend in Korea’s food franchise industry. He established Mr. Pizza’s first domestic branch in 1990 near Ewha Womans University. The brand was Japanese then, but two decades later, he acquired the trademark for Mr. Pizza, making the brand Korean. Mr. Pizza currently has 350 branches operating nationwide.