Samsung becomes No. 2 vendor for wearables

Samsung becomes No. 2 vendor for wearables 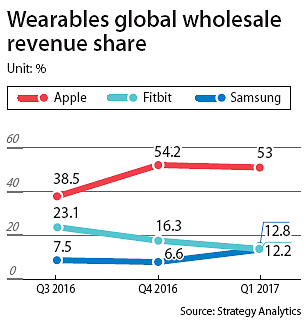 According to data from the global market research firm Strategy Analytics on Monday, the Korean electronics giant captured 12.8 percent share of the core wearable market by wholesale revenue.

“Samsung overtook Fitbit for the first time due to the Gear S3 and a relatively weak quarter from Fitbit,” Strategy Analytics said in a report on global core wearables revenue published on June 17.

While Samsung has been a leader in the smartwatch market along with its rival Apple, its presence in the overall wearable market, which includes fitness bands, has been relatively weak. Fitbit has been a stronger player in bands as it focused particularly on offering wearable exercise gadgets.

Samsung’s newest smartwatch, the Gear S3, has been gaining positive reviews and selling on par with its predecessor, the Gear S2, according to a spokeswoman from Samsung. She declined to give actual sales figure.

Nevertheless, Apple maintained its rank as the top vendor for global wearable devices. The company recorded 53 percent share in the core wearables market by revenue in the first quarter this year, down a little from 54.2 percent dominance in the previous quarter, but still greatly ahead of others. Rankings by revenue are different from rankings based on sales volume of wearable devices.

Apple ranked top with 15.9 percent share in terms of sales volume in the first quarter, followed by Chinese Xiaomi with 15.5 percent and Fitbit with 13.2 percent.