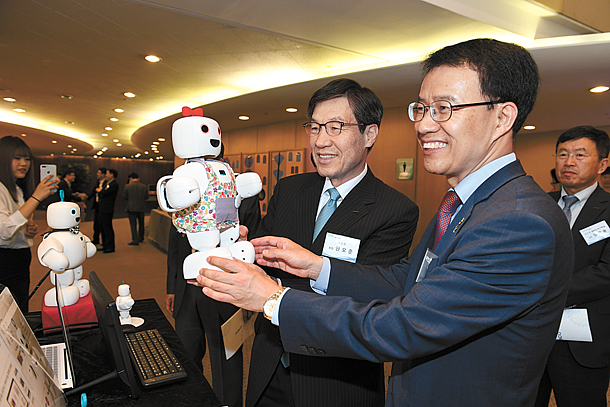 At the 13th Idea Marketplace, Posco Chairman Kwon Oh-joon tries out the features of piBo, which is created by Circulus, a joint venture. PiBo is a personal robot for household use that keeps user’s schedule like a secretary. [POSCO]

On June 21, Posco, the country’s leading steel producer, held the 13th Idea Marketplace at Posco Center. The Idea Marketplace (IMP) is Posco’s venture start-up support program which Posco either directly collaborating with startups or promoting them to outside investors. At the conference, Posco announced ten venture companies that have been selected for their support program this year. Posco Chairman Kwon Oh-joon stated in his welcoming speech that Posco will invigorate the establishment of venture companies and actively support the creation of jobs through developing new business areas.

Posco provides its selected startups with the knowledge and expertise they have accumulated over decades to make the startups more competitive. The company also provides some promising innovators with training and consulting services from experts as well as establishing necessary infrastructure for the startups. By preparing a network for the startups, Posco hopes to have them successfully promote themselves to potential investors with compelling business ideas and attract investment. By helping the prospective venture businesses and investors build a connection, Posco attracts as much direct investments from external sources as possible. The marketplace mirrors a mechanism widely used in Silicon Valley where prospective startups present their business ideas to potential investors, receive advice from experts in related fields, and create networks. Through providing a variety of strategic management, personnel and technological support to small and medium venture companies, Posco aims to create an ecosystem in which startups actively interact with Posco and grow up rapidly, which will eventually contribute to the nation’s economy.

Another program Posco launched to foster the growth of small and medium enterprises is the Techno Partnership Support Team, through which Posco offers customized technological support to small and medium enterprises. This technological cooperation program also enables Posco to ensure its partners’ product quality and stable supplies and secure the competitiveness of the whole supply chain.

Posco has been playing a key role in the nation’s economic development through these activities, which nurtures competent small and medium enterprises and startups and has created a lot of jobs for young adults. Through the Idea Marketplace, Posco has fostered 142 startup companies over seven years, contributing to the creation of jobs for 574 young adults. According to Chairman Kwon Oh-joon, an active approach to discovering innovative ideas and commercializing them is surely the best way to find a breakthrough in the current stagnant economy of Korea and drive future growth.

Another activity Posco focuses on to revive the nation’s economy is offering free artificial intelligence (AI) education to jobseekers from underprivileged households in order to make them competitive for job openings. The free educational courses Posco offers are focused on preparing young people for the upcoming fourth industrial revolution by educating them about the Internet of Things (IoT), big data and AI because Posco believes that the participants more familiar with those areas will be more qualified for job openings.

In addition to financing the costs of all the curriculums for this program to help the participants develop expertise, Posco also provides the required training equipment and connects the participants with employers in related industries to offer practical career guidance. The fundamental curriculum consist of an eight-week online-based course provided to anyone interested in joining, whereas the advanced curriculum, which offers more in-depth theoretical and field lectures, only allows 100 selected young jobseekers from low-income families.