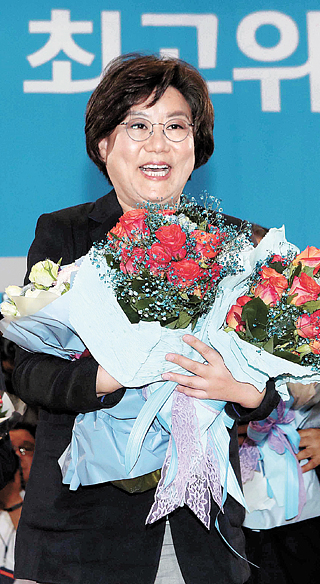 Rep. Lee Hye-hoon after being elected as new chairwoman of the conservative opposition Bareun Party on Monday. [OH JONG-TAEK]

The Minor conservative Bareun Party elected three-term lawmaker Lee Hye-hoon as their new party chief on Monday, giving the former economist a chance to steer the party 48 days after its defeat in the presidential election.

In combined ballot counts from the general public and party members, Lee won 36.9 percent of the votes. Rep. Ha Tae-keung came behind her with 33.1 percent, followed by Jeong Woon-chun with 17.6 percent and Rep. Kim Young-woo with 12.5 percent.

Speaking on the podium, Lee, who has a doctoral degree in economics from UCLA, promised that the Bareun Party under her leadership would not just be a party of “no” in opposition to the Moon Jae-in government, but vowed to make the party a “productive alternative” that would fill in the “shortcomings” of the ruling Democratic Party.

“I will not trap myself in a partisan ideology that opposes everything [championed by the Moon government],” said the new party leader. “I will cooperate fully if it is for the sake of Republic of Korea. I will also fiercely confront issues that go against the principles of reformist conservatism.”

With her victory, Lee now faces the difficult task of navigating the party in the 299-member Assembly with 20 lawmakers under its wing. It cannot lose a single lawmaker, as doing so would mean losing its parliamentary negotiating authority, which is only given to a party with at least 20 lawmakers.

She must also raise the party approval rating, which remains in the single digits, before the public will see the party as a strong alternative to the Liberty Korea Party (LKP), which Lee assailed in her acceptance speech as a party of “worn-out conservatives.”

The first measure of how far she is willing to go to cooperate with the Moon government will be her stance on Moon’s ambitious plan to create jobs with a supplementary budget bill worth 11.2 trillion won ($10 billion). As the June extraordinary session wraps up on Tuesday, parties will decide whether to put it up for a vote during the July extraordinary session.

There is expectation among the governing party and the Moon administration that Lee could support government initiatives, including the supplementary bill, judging from her past complimentary remarks about Moon in his first days. Lee once said she was wary of Moon because “he was doing too good” as president. Such a remark sparked speculation that she might take a cabinet position, which did not happen.

With Lee’s victory Monday, three of five political parties are now run under female leadership, with the ruling DP by Choo Mi-ae and the minor progressive Justice Party by Sim Sang-jeung, who was the party nominee for the May 9 election.