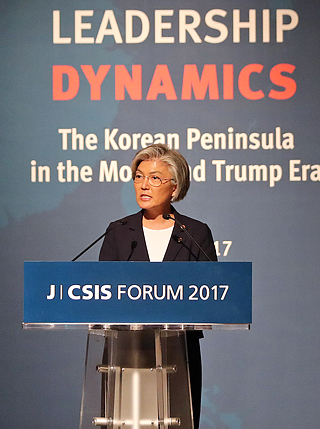 Trying to dismiss worries that Presidents Moon Jae-in and Donald Trump may disagree on several major issues in their upcoming summit, South Korea’s Foreign Affairs Minister Kang Kyung-wha said Monday that the so-called environment impact assessment of the Terminal High Altitude Area Defense (Thaad) missile shield, which will delay full deployment, was not a sign that Seoul would cancel or reverse the agreement to deploy the system.

Kang stressed that the assessment was an issue of “domestic due process” and that the democratic and procedural legitimacy obtained by it will solidify public support for the Thaad battery’s deployment - leading to a strengthened U.S.-South Korean alliance.

Kang made those assertions in a policy speech during the JoongAng Ilbo-CSIS Forum 2017, the seventh annual forum, which provides a platform for scholars and former government officials from the United States and South Korea to discuss security issues in the Asia-Pacific region.

The forum was co-organized by the JoongAng Ilbo and the Center for Strategic and International Studies (CSIS), a foreign policy think tank headquartered in Washington. This year’s theme was “Leadership Dynamics: The Korean Peninsula in the Moon and Trump Era.”

On North Korea issues, Kang said that Moon’s strategy “mirrors that of maximum pressure and engagement of the United States” and that the summit with Trump later this week will “underscore communication and mutual understanding” between the two leaders. “Presidents Moon and Trump see eye-to-eye on North Korea nuclear and missile issues,” said Kang, adding that the Moon administration, too, was “ready to deploy all possible options [of] sanctions, pressure and dialogue” to tackle the mounting challenge North Korea presents. 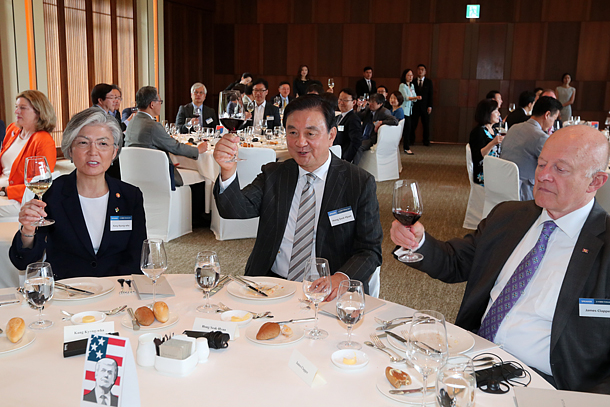 James Clapper, U.S. director of national intelligence for the Barack Obama administration, who was sent to North Korea in November 2014 to secure the release of two American detainees, said the Trump administration should establish a liaison office in Pyongyang and allow the regime to set up a similar presence in Washington, to break the current diplomatic impasses. That measure was the “only path” to what he thought could lead to a “soft implosion” in the North.

In coordination with the South Korean leadership and other regional stakeholders, Clapper, who retired as national intelligence director in January, said during his keynote speech that the U.S. should offer to establish an “interest section” in Pyongyang like the one it had in Havana, Cuba for decades.

Clapper said the diplomatic representation will serve as a means of regular dialogue between the two countries and, for North Korea, a “critical conduit” for information from the outside world, which would lead to the regime’s “soft implosion.”

In return, the U.S. could ask the North’s agreement for a “verifiable stop” of its nuclear and missile tests, which would delay their weapons development capability.

The proposal was based on his personal experience in 2014 talking with Kim Won-hong, who at the time was serving as North Korea’s state security minister, and Kim Yong-chol, then-head of the Reconnaissance General Bureau, said Clapper.

On Nov. 7, 2014, Clapper flew into Pyongyang and arranged to fly out two American citizens, Kenneth Bae and Matthew Todd Miller.

“I was amazed at the magnitude and depth of paranoia, and the overwhelming sense of siege that seems to prevail among the elite leadership in the North,” said Clapper. “Everywhere they look, from their perspective as I heard repeatedly, they see enemies who threaten their very existence.”

Clapper stressed that he learned North Korea won’t give up their nuclear weapons because a nuclear capability for them is “their ticket to survival.” “It’s all about face, recognition and leverage,” said the former intelligence director, “They have none of that without their nuclear weapons.”

On why a liaison office would work with North Korea, Clapper highlighted that Pyongyang’s leaders “do crave communication” with Washington, and that “they want that dialogue with the United States.”

The chances that the Trump administration would actually follow his advice, however, were low, he acknowledged without explaining further.

In regards to Otto Warmbier, the 22-year-old American college student who died on June 19 just six days after he was released from the North in a vegetative state, Clapper said the former Obama administration couldn’t get him out because, to his knowledge, North Korea never stipulated any conditions for his release.

They “never said anything, never made an offer, never allowed the Swedish delegation in Pyongyang, which acts for us in diplomatic consular affairs… access to Otto Warmbier, which they did with the other prisoners,” Clapper said.

“Unless there’s some dialogue, front channel or back channel, it’s very hard to arrange for the release." Clapper continued that for “whatever reason,” North Korea “singled him out.”

“If North Korea expressed what their conditions were, I’m sure we would have addressed those,” he said. “In case of Kenneth Bae and Matthew Miller, they said they wanted a captain-level official who was active in the National Security Council to come to Pyongyang.

“So we sent somebody - me - to do that. They specifically [had] no conditions whatsoever for the release of Otto Warmbier.”

John Hamre, president and CEO of CSIS, who served as deputy secretary of defense in the former Clinton administration, said with an air of rage that if North Korea thinks America will get softer when they “take hostage a kid,” they are “so wrong.”

“That makes us harder,” said Hamre, “because that makes the egregious regime personal - something I can understand. Average Americans don’t know about the divided Korea or the history but when you take a kid prisoner because he tried to take a poster off the wall and they think America can get softer, they’re crazy.”

On the outlooks of the upcoming U.S.-South Korea summit, Hamre said he was “not worried” about Trump and Moon failing to find a “mutually reinforcing approach to North Korea.”