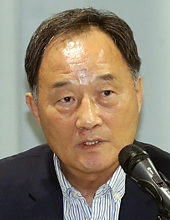 The Korea Football Association (KFA) said its Vice President Kim Ho-gon has been named the head of its technical committee.

Kim, 66, replaces Lee Yong-soo, who stepped down on June 15, the same day that the men’s national team head coach Uli Stielike was sacked.

Kim’s first job as the technical chief will be to name Stielike’s successor, with Korea clinging to the last automatic berth in the final Asian qualifying round for the 2018 FIFA World Cup.

Kim led Korea to the quarterfinals at the 2004 Athens Olympics. He served as an assistant coach at the 1988 and 1992 Olympics, and the 1986 FIFA World Cup in Mexico.

He has been a vice president for the KFA since 2015.

At a press conference at the KFA’s headquarters in Seoul, Kim said he felt a heavy burden of responsibility to take on such a critical job with the men’s national team dealing with challenges on many levels.

“I thought someone had to step up and do the work at this particular juncture,” Kim said. “Those of us in football and our fans may all have different opinions [on the next men’s head coach], and I hope we can come to a positive conclusion.”

As for qualifications for the next coach, Kim said he believes a Korean coach is a better fit, since the ability to communicate without a language barrier will be crucial.

“I think the key for the head coach is to bring out the best in players while minimizing their weaknesses, and that has to be done through communication,” Kim said. “And we won’t have much time [until the next World Cup qualifying match], and that’s why communication is so important now.”

Korea are currently sitting in second place in Group A with 13 points, seven back of Iran and one ahead of Uzbekistan, with two to play. Korea will host Iran on Aug. 31 and face Uzbekistan in Tashkent five days later.

Only the top two teams from each of the two groups will directly advance to the 2018 World Cup in Russia. The two third-place teams must go through playoffs for their final chance. Korea are trying to qualify for their ninth consecutive World Cup, but a string of lethargic matches cost Stielike his job.

Kim said he’ll try to put together a new technical committee as early as possible, possibly next week.

“The job is open for everyone, and I’ll start the process with a clean slate,” he said. “We’ll consider many different factors, including track records and tactical acumen. We’ll go with someone who can get the team through this difficult period.”