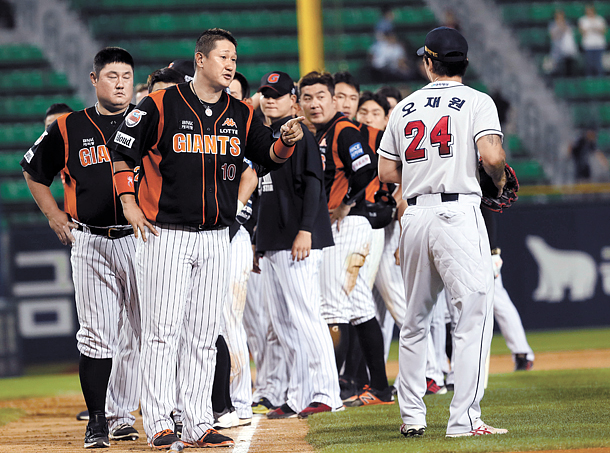 Lee Dae-ho of the Lotte Giants, second from left, points at Oh Jae-won of the Doosan Bears, in white, regarding an incident in the ninth inning of a game at Jamsil Baseball Stadium on Friday. [KIM JIN-KYUNG]

In the world of sports, there are unspoken rules kept among the players, but since they aren’t official, they often lead to trouble.

Upon completion of the game between the Doosan Bears and the Lotte Giants at Jamsil Baseball Stadium on Friday, Lee Dae-ho of the Giants called Oh Jae-won of the Bears. It seemed as if the two were having a serious conversation, in which Lee seemed to be scolding Oh.

Once the scene was televised, Lee was criticized by fans for lecturing a player of another team.

The incident all began at the top of ninth, when Oh tagged Lee to conclude the game. Since it is an unspoken rule in baseball for a team with a big lead to not irritate the losing team, Lee showed a sense of discomfort after he was tagged out. 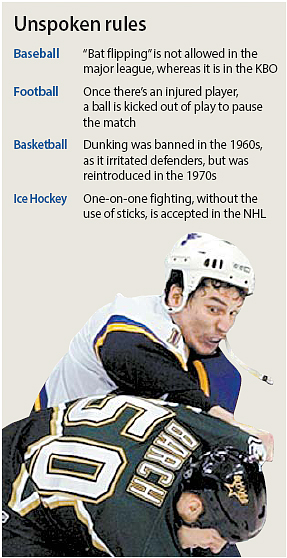 “I felt like he was playing around because we are close, so I told Oh Jae-won not to do that anymore,” Lee said after the game.

“In sports, we still have that authoritative culture,” said Kim Yoo-kyum, professor of sports management at Seoul National University. “A unilateral conversation must be changed to a horizontal conversation.”

In a society where people often take advantage of social power, fans criticized Lee, believing that at least in sports, such authoritative hierarchies have no place.

“If it seemed like I was scolding him, then it’s my fault,” Lee said.

The incident came to a conclusion the next day when Oh got to first base after being given a walk and hugged Lee, who was the first baseman.

Similarly, in basketball, during the fourth quarter, a team that is leading by a large gap is not to call a time out. In a basketball game, teams have to play their hardest until the buzzer, but if a team is leading by 20 to 30 points, then their hard work to score more may be seen as an insult to the other team.

In volleyball, where a team celebrates every time they score, they are asked not to make any motion over the net, towards a player from the opposing team.

In football, it is normal for a player to not celebrate after scoring against their former team. When a Real Madrid player scored a goal against Manchester United in March 2013, Cristiano Ronaldo gestured to his teammate not to celebrate, as a kindness to Manchester, for whom Ronaldo played for six seasons.

Also, if a player is injured during a football match, they will often kick the ball out of play to give time for treatment. During the semi-final match for the Asian Football Confederations (AFC) Champions League in October 2011, between Suwon Samsung Bluewings and Al Sadd SC of Qatar Sports League, Choi Sung-hwan, center-back for Suwon, and Wesam Rizik, midfielder for Al Sadd, both got injured while competing for a ball. Yeom Ki-hun, winger for Suwon, intentionally kicked the ball out of play to allow time for treatment.

After, an Al Sadd player made a throw-in and kicked the ball towards the goalkeeper to allow Suwon to take back possession, as that is another unspoken rule. However, all of a sudden, Mamadou Niang, a forward for Al Sadd, came across the field and scored a goal, rather than giving the ball to Suwon.

A Suwon fan then ran up to the group and a brawl broke out between the Al Sadd player and Suwon fan.

Over the years, these unspoken rules have changed. During the 1960s, dunking in basketball was considered an insult but after Julius Erving, mostly known by the nickname “Dr. J,” renowned for his stylish dunks in the 1970s, they are now considered one of the best parts of the game.