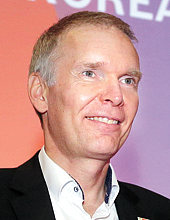 The Korean unit of the global auto parts manufacturer held its annual conference on Tuesday in Yeouido, western Seoul and announced that it posted 2.3 trillion won ($2 billion) in sales last year, a slight increase from the previous year’s 2.2 trillion won.

“We are stepping ahead to shape the transformation in future mobility in Korea by strengthening our product portfolio in the domestic market,” Frank Schaefers, president of Robert Bosch Korea, said during the press event.

“In addition, we are seizing new opportunities with the increasing demand for connectivity solutions also in Korea,” he added.

Driving assistance systems, a key element of autonomous driving technology, assist with all aspects of driving including braking, steering and acceleration.

The systems rely on sensors, cameras and radar to operate.

Looking to the futur, the Bosch Group intends to use its resources to turn the traditional internal combustion engine powertrain to a more eco-friendly version and invest in electric mobility.

The group has invested 400 million euros ($448 million) every year in electric mobility alone, including battery-cell technologies.

The German auto parts giant has been keen to implement elements of Industry 4.0 in its production line and Bosch Korea’s Daejeon plant is no exception.

Bosch Korea said it has already installed an “active cockpit solution” to its factory where real-time data of digitalized production is provided on a dashboard to help monitoring. A new system called “iStation” is being tested in the factory as well, which provides work instructions and machine check sheets to the employees through smart devices.

Bosch Korea has 1,900 employees and plans to complete a 130 billion won investment plan in its local operations by next year.