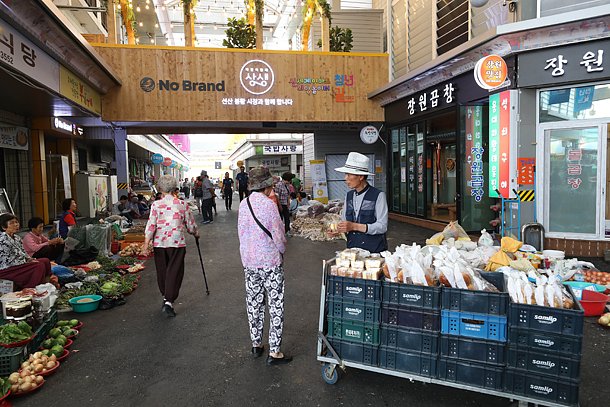 A merchant sells bread in the Sangseon Bonghwang Market in Gumi, North Gyeongsang on Tuesday. E-Mart’s new No Brand store inside the traditional market opened the same day. [E-MART]

GUMI, North Gyeongsang - The Seonsan Bonghwang Market in Gumi holds the biggest 5-day markets in all of North Gyeongsang. Yet for the last 24 years, the second floor of the building has stood empty due to a lack of tenants. This has begun to change, thanks to an initiative started by 39-year-old Kim Soo-yeon, who runs a handmade soap store inside the market.

“When I heard how E-Mart set up a No Brand store in Dangjin Fish Market in Dangjin, South Chungcheong, I thought the same idea could be applied to ours too,” she said. She was the one that initially took the idea to the market’s merchant association and sent E-Mart a proposal for collaboration.

E-Mart opened a No Brand store located inside the traditional market on Tuesday. This is the second time the discount chain has launched a store dedicated to its in-house branded products inside a traditional market since August.

No Brand is E-Mart’s in-house brand for household supplies and packaged food.

The items are sold in plain, unbranded packaging, allowing E-Mart to reduce the overall cost for the consumer. Launched in 2015, its line-up started with nine products but now has over 900.

The recent project is significant in that it was a collaboration of not only E-Mart and the market, but also 17 young entrepreneurs who have opened up businesses alongside the No Brand store.

The 17 new businesses benefitted from a government subsidy aimed at encouraging entrepreneurs to open new stores inside traditional markets. After E-Mart’s No Brand decided to open its store in Seongsan Bongwhang Market, applicants for the government program to enter the market increased from six to the current 17.

Their shops were set up closer to the stairwell - the only entrance to the building’s second floor - to ensure that customers take a look around the stores before arriving at No Brand, located furthest from the stairs.

The No Brand store itself looked closer to a warehouse club than an ordinary supermarket, with products stacked on steel shelves. The products on offer are processed foods or daily household supplies. As a result of a deal between E-Mart and the market association, sales of fresh food were handed over to the traditional market. The only exception is seafood, which was not sold by local merchants and was requested by the market association.

“One thing I feel during collaboration projects with traditional markets is that the reason they don’t sell as much these days is because they have no content that keeps pulling people in,” said Kim Sang-min, E-Mart’s head of corporate social responsibility. “That’s why we made an effort to make the Sangseon Bonghwang Traditional Market resemble the model of a complex mall.”

E-Mart’s involvement in the project can also be seen as a response to criticism following its decision last year to open individual No Brand stores nationwide. The move was criticized by small and mid-sized business owners, including local supermarkets, as E-Mart was offering the same goods as existing local stores at a much lower price.