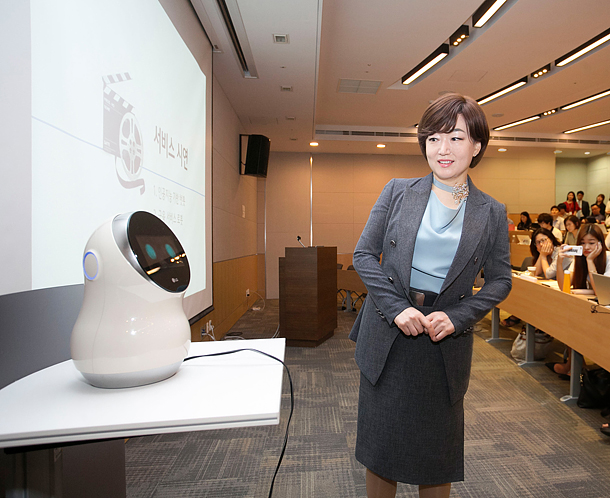 A staff member from LG CNS demonstrates a robot designed for financial services on Tuesday at the FKI Tower in Yeouido, western Seoul. [LG CNS]

The information technology branch of LG Corporation, known as LG CNS, announced on Tuesday it plans to expand into the digital financial IT market by and open a digital financial center specializing in new technologies, such as blockchain and artificial intelligence.

The company plans to go from 30 to 200 employees in digital financial technologies by the end of next year, while opening up a digital financial center that will consist of a business team, a consulting team and a convergence service team.

It has set out four goals - early implementation of the latest technologies, including financial chatbots and artificial intelligence-based humanoids at financial branches, restructuring the digital infrastructure to center on cloud storage systems and big data, financial services based on platforms such as blockchain and supporting existing financial systems.

LG CNS estimated the local financial IT service market will grow an average of 19 percent to be worth 300 billion won ($264 million) by 2020.

The company has been strengthening its blockchain area in particular, since at the end of May this year it signed a cooperation contract with the world’s largest financial blockchain consortium, R3, which includes over 80 financial institutions, such as Korea’s KEB Hana Bank and Shinhan Bank.

According to the LG CNS R3 platform, Corda provides faster processing during financial transactions than other blockchain technologies, as distributed ledgers are secured among business partners rather than among all participants.

LG CNS has also signed a strategic alliance with Coinplug, which has the largest blockchain technology patent in Korea.

LG CNS is not the only company that is aggressively expanding its blockchain business. Samsung SDS and SK C&C have also been increasing their efforts.

Samsung SDS, which created an exclusive team focused on developing blockchain technologies in 2015, has been working with Samsung Card since October to adopt blockchain, and unveiled its blockchain platform Nexledger in April.

SK C&C has recently been applying its blockchain technology in SK Group’s logistic system, which the company claims could accelerate the digitization of cargo shipping and other logistic services.

The competition among these companies comes at a time when the Korea Federation of Banks is expected to select a company that will be responsible for installing the network for a single blockchain certification system.

LG CNS expressed its confidence in the digital financial IT service business, citing its past work with Korean financial companies such as Woori Bank.

The company has developed a chatbot for the bank as well as plans to station humanoid robots at bank branches by the end of the year. Both chatbots and humanoids will provide financial advice.