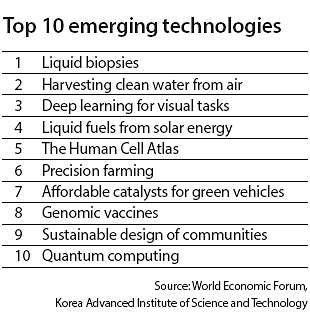 From “artificial leaves” that turn CO2 into fuel to a technique for harvesting water from air, the top 10 emerging technologies cited by the World Economic Forum on Monday are more than mere gadgets - they are purposeful.

Together with the U.S. science magazine “Scientific American,” the World Economic Forum selected notable innovations and announced the list just a day before the WEF’s annual June event, the Summer Davos Forum, began on Tuesday in Dalian, China.

“There were other technologies with greater technological significance, but we finalized the top 10 emerging based on whether they could make a widespread impact within a few years,” said Lee Sang-yup, distinguished professor at the Korea Advanced Institute of Science and Technology, who participated in selecting the technologies.

Among those chosen is a technology that harvests clean water from air. While the ability to do this is not completely new, existing technologies require high moisture levels and a lot of electricity. But a team from the Massachusetts Institute of Technology and the University of California, Berkeley recently succeeded in converting air to water using no energy. The Arizona-based start-up Zero Mass Water is also capable of producing two to five liters (0.5 to 1.3 gallons) of water per day using an off-grid solar system.

Also on the list is the widespread “deep learning” technology, which gained attention after Google DeepMind’s AlpahGo defeated Korean Go player Lee Se-dol. This technology is helping computers perform visual tasks and, with the development of autonomous vehicles, medical diagnostics and various monitoring schemes, computer-vision technologies are increasingly being put into use.

Other emerging technologies include the Human Cell Atlas, launched last year and backed by the Chan Zuckerberg Initiative, which aims to identify every cell type in every tissue to determine their functions and interaction patterns, and genomic vaccines, which are vaccines based on genes rather than proteins.

“New technologies are redefining industries, blurring traditional boundaries and creating new opportunities on a scale never seen before,” said Murat Sonmez, head of the Center for the Fourth Industrial Revolution of the World Economic Forum.