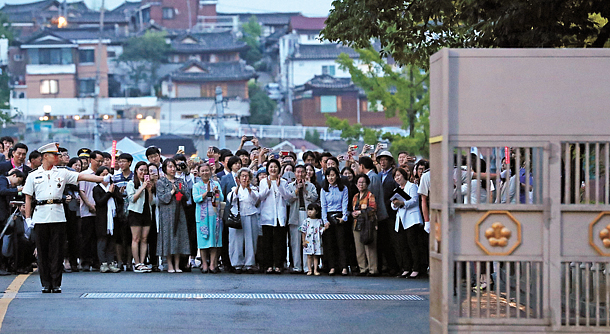 First Lady Kim Jung-sook, center, and citizens celebrate and take photos as the closure of the road in front of the Blue House was lifted Monday night after nearly 50 years. [YONHAP]

On the first day in nearly 50 years that the road in front of the Blue House was open to the public for 24 hours on Monday, passersby could be seen taking photos with the presidential office in the background, while some union members on strike came into light scuffles with police in their attempts to rally on the road.

“Please step back, you are holding a rally here illegally,” a police officer said into a megaphone on the road in front of the Blue House on Monday.

Members of the Korea Confederation and Trade Unions, who by then had staged a sit-in close to the road for more than a week, booed at the officer.

A few members tried to stage the sit-in closer to the Blue House but were blocked by officers. They hurled expletives at the police and a few physical scuffles broke out.

“Why can’t we stage rallies here when everyone else is walking about freely?” one union member yelled at police.

“This is completely illegal,” said a passerby. “The union members say something like, ‘This is the will of the people and the candlelight vigils,’ but I wish they wouldn’t. I was one of the people who held candles in the rallies in Gwanghwamun Square and I am not one of them.”

“If people on strike move near the Blue House, it becomes a march, and marches that were not reported to and approved by police in advance must be blocked,” said Kim Jung-hoon, chief of the Seoul Metropolitan Police Agency. “If individuals would like to stage one-person rallies near the Blue House, we will increase the number of officers on site to make sure there is no threat to security.”

On Monday, five nighttime check points and barricades near the Blue House were removed for the first time since 1968.

The road in front of the Blue House has been shut down from 8 p.m. to 5:30 a.m. daily since the North’s failed assassination attempt on Jan. 21, 1968. The commandos managed to approach a checkpoint less than 100 meters (109 yards) from the Blue House, but were challenged by local police. After shooting broke out, the assassins dispersed. A sweep followed, in which 29 of the commandos were killed, one was captured and one escaped. South Korea suffered the loss of 30 soldiers and police officers and eight civilians.

The new opening of the road nearest to the Blue House, linking the presidential press center of Chunchugwan and the water fountain, is a measure “to break the belief that the Blue House is an authoritarian space,” according to presidential spokesman Park Soo-hyun.