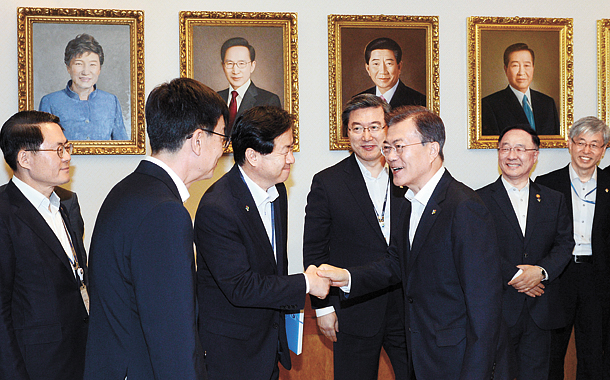 President Moon Jae-in on Tuesday shakes hands with his cabinet officials ahead of convening his first cabinet meeting in 48 days since he took office. [JOINT PRES CORPS]

The Blue House also appointed Pak Un-jong, professor of law at Seoul National University (SNU), as the new head of the Anti-Corruption and Civil Rights Commission, a ministerial-level position, and Lee Jin-gyu, a career bureaucrat, as the first vice minister of science, ICT and future planning.

Like Ahn, Park is also a non-career prosecutor who holds a doctoral degree in criminal law from the University of Gottingen in Germany and has served as co-chairman of the progressive civil group the Citizens’ Coalition for Economic Justice.

By selecting Park, Moon appears to be hardening his resolve to reform the prosecutorial body by turning it into an apolitical organization. 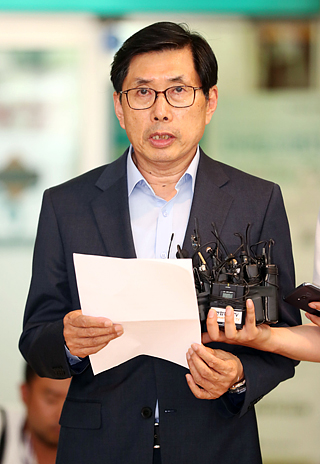 “[Justice Minister] nominee Park is a legal scholar who has consistently tried to reform the prosecution and judicial system,” said the Blue House spokesman, Park Soo-hyun, at the press briefing on Tuesday. “He is the right person to realize the new administration’s blueprint for reform.”

Park’s appointment came 11 days after Ahn Kyong-whan, an emeritus professor of law studies at SNU, became the first ministerial nominee to bow out under growing scrutiny concerning his personal conduct, particularly his fraudulent marriage in 1975, which was nullified the following year, to a woman whose seal he had forged on the marital certificate. Ahn’s dropout sparked demands from the opposition that Cho Kook, senior presidential secretary for civil affairs in charge of vetting process, resign.

Park’s appointment also illustrates the president’s determination to reform the judicial system, which the Blue House views as overly influenced by the prosecution. It was customary in past governments for justice ministers to be picked from among retired veteran prosecutors, such as former Prime Minister Hwang Kyo-ahn, who was named justice minister after decades of service in the prosecution.

“The purpose of the appointment is to free the judicial system of prosecutorial influence,” said a senior Blue House official, speaking on the condition of anonymity.

Pak Un-jong, the new head of the civil rights commission, earned her Ph.D. in law from the University of Freiburg in Germany. The Blue House touted her as the right person to help Korean society become more transparent and free of corruption by correcting administrative regulations and corrupt practices while “protecting the people’s rights.”

Moon also appointed Shin Hyun-soo, a former career prosecutor, as executive director of the National Intelligence Service (NIS). The main spy agency said in a press release that Shin would be able to reform and manage the NIS in a stable manner by drawing upon experience as a legal professional.

On Tuesday, Moon held the first cabinet meeting since he took office on May 10 with Prime Minister Lee Nak-yon and six other ministers who faced parliamentary hearings over the past month.

Moon used the occasion to implore the National Assembly to pass a supplementary budget bill worth $10 billion aimed at creating jobs, arguing that the special bill could generate 3-percent economic growth.

“If the supplementary bill is implemented in a timely manner, we may find a way out of the low 2-percent growth rate,” Moon said. “Our economic team’s forecast is that we could enter a 3-percent growth era. This budget will be used to prop up regional economies by increasing the number of firefighters there, widening social welfare services and creating jobs for the elderly.”

During the meeting, Moon made good on one of the promises he had made in his first days as president by recognizing the deaths of two contract teachers of Danwon High School who died with their students in the Sewol ferry as “deaths on duty.”

To do so, Moon passed revisions to the Public Officials Pension Act.

“Today’s passage will serve to affirm the country’s commitment to honor those who sacrifice themselves in service to their country,” said Yoon Young-chan, the chief press secretary for the president, “and that their sacrifices should never be in vain.”