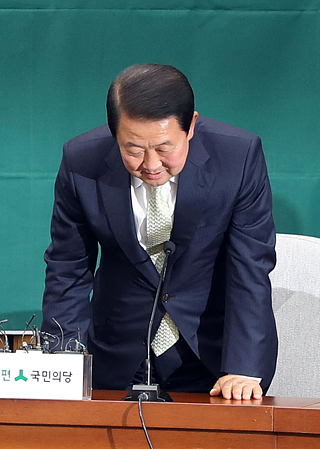 The People’s Party is facing its biggest political crisis after it was revealed that it used a fake audio tape at the height of this year’s presidential campaign to smear the candidacy of Moon Jae-in.

The tape claimed that the son of Moon, who won the election, received special treatment to land a job at a state-run entity.

In full emergency mode, the party of 40 lawmakers acknowledged Monday that it had used a fabricated audio tape to tarnish the Moon campaign at a press briefing on May 5, just four days before the election, and apologized.

In the phony tape, a person alleging to be a friend of the son, Moon Joon-yong, from the graduate school at Parsons School of Design, claims Joon-yong landed a full-time job at the Korea Employment Information Service (KEIS) in late 2006 because his father was senior presidential secretary for civil affairs.

In the tape, the person went on to allege that Joon-yong applied for the position after he was told to do so by his father.

Moon Joon-yong studied design and technology at the Parsons School of Design in 2010.

Party member Lee Yoo-mi allegedly made the tape. One of her relatives played the role of the school friend. Lee gave the tape to Lee Jun-suh, who was a People’s Party Supreme Council member.

Prosecutors are now investigating whether Lee Jun-suh instructed Lee Yoo-mi to produce the fake tape and, if so, whether the instruction came from higher up the chain of command within the campaign. Prosecutors on Monday arrested Lee Yoo-mi on charges that she spread false information and questioned her Monday and Tuesday.

Before her arrest, Lee sent text messages to other party members that she was about to be questioned about “fake documents” she made at the order of a senior party member, in reference to Lee Jun-suh.

Lee Jun-suh is barred from leaving the country, the prosecution said Tuesday, and is expected to be summoned for questioning this week.

With the tape, the Ahn Cheol-soo campaign went on a full offensive against Moon just days before the election, saying it was a clear proof that Moon’s son received a special treatment.

Some compared it with the admission of Chung Yoo-ra, daughter of Choi Soon-sil, into Ewha Womans University using her mother’s connection to former President Park Geun-hye. On May 6, the day after the press conference, the People’s Party issued 13 statements condemning Moon Joon-yong for special treatment he received.

Ahn Cheol-soo, co-founder of the People’s Party, was defeated by Moon in the May election.

“While the party calls on the prosecution to get to the bottom of this case, we will launch our own probe team to find out what happened and sternly punish those responsible in accordance with party regulations,” said Park Joo-sun, an interim party chief, at the press briefing on Monday.

Another point to watch is whether Ahn campaign officials went ahead with the May 5 press briefing to attack the Moon campaign even though they knew the tape was fake.

Cho Jae-yeon, a prosecutor involved in the investigation, declined to answer whether Lee Yoo-mi confessed she was instructed to create the tape by senior campaign staff, citing an ongoing probe, according to the JoongAng Ilbo. But he said Lee had acknowledged she was responsible for the fake material on Tuesday.

Former People’s Party nominee Ahn has yet to issue a statement on the issue as of press time Tuesday.