Trust building is the key

Trust building is the key 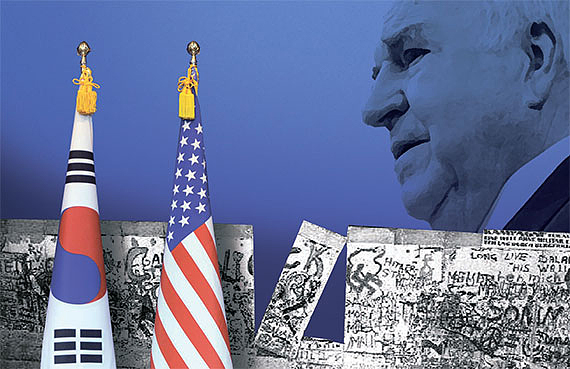 When asked what was the most difficult thing about being the British prime minister, Harold Macmillan said, “Events, dear boy, events.” The future of a nation is determined by how unexpected events are handled. The recently deceased former German Chancellor Helmut Kohl became the father of German reunification as he turned the fall of the Berlin Wall in 1989 into the unification of East and West Germany.

Of course, Kohl was a fortunate individual who happened to be Chancellor of West Germany at the time of the fall of Berlin Wall. But we must pay attention to the fact that he had made strenuous efforts to prepare a solid diplomatic foundation for unification with neighbors and superpowers, which was essential.

When it comes to luck, I like to quote South African golfer and grand slammer Gary Player. When asked how he could be so lucky to win so often, he responded, “Well, the harder I practice, the luckier I get.” How could someone sink a putt at a critical moment without hard practice and solid skills?

When the Berlin Wall fell, no political leader, including Helmut Kohl, had predicted it. A day before the fall, the head of West German intelligence agency said in Washington that he did not expect reunification in ten years.

Kohl thought that foreign policy is more important than domestic policy because diplomatic mistakes come with a high price. He believed that building personal confidence with leaders of neighboring countries was important to prevent diplomatic failures. He knew that France and the UK didn’t want a unified Germany to be too powerful and that without their support, German reunification was impossible. He also knew that to win them over, active support from the United States was essential.

Kohl predicted that the former Soviet Union would not want Germany to remain in NATO after reunification. So, he faithfully worked to build mutual trust with then-Soviet leader Mikhail Gorbachev as well as U.S. President George H. W. Bush. Kohl made all the economic, political and diplomatic efforts he could, including a casual “sweater summit” with Gorbachev.

Today, we are living in the era of deep uncertainty. Predicting the future is extremely hard, especially as the United States — under President Donald Trump’s unpredictable leadership — is still the most influential country in every way: for security, economics, militarily and in diplomacy. As a sudden geopolitical change can happen on the Korean Peninsula, “events” that could lead to reunification can occur at any time. That’s why we need constant, therapeutic trust-building with neighbors as Kohl patiently pursued.

President Moon Jae-in is having a summit with U.S. President Donald Trump this week. The two leaders will share their thoughts on issues such as North Korea’s nuclear and missiles program and the Thaad deployment. In a long-term perspective, they will confirm the importance of the Korea-U.S. alliance. It is a great idea that Moon begins the Korea-U.S. summit schedule with an offering of flowers at the Battle of Chosin Reservoir Memorial. It will send a stronger message to Trump and U.S. citizens than any rhetoric on the Korea-U.S. alliance.

Another significance of the first summit is to build the very foundation of personal trust between two leaders who will cooperate as important allies for the next four years. It is known that Japanese Prime Minister Shinzo Abe and Chinese President Xi Jinping have established considerable trust with Trump through summits.

Trump treats diplomacy like business deals. He could bypass Korea and deal directly with Japan and China on geopolitical events that could lead to Korea’s reunification. The Korea-U.S. summit will be an opportunity to clear such concerns and enhance Korea’s diplomatic standing.