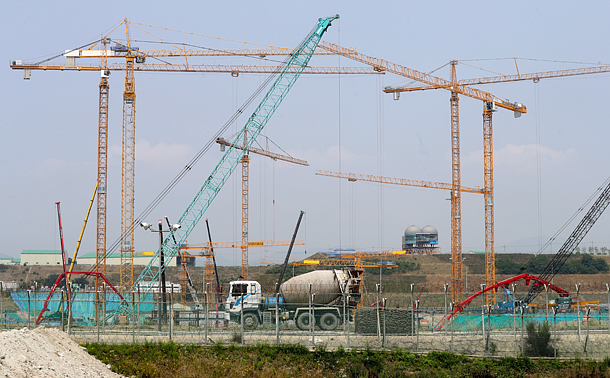 The construction site for the Shin Kori 5 and 6 nuclear reactors in Ulsan on Wednesday. The government has temporarily halted construction of the nuclear plants to assess public sentiment before deciding whether to cancel the projects entirely. [YONHAP]

As President Moon Jae-in pushes ahead with his vision of a nuclear energy-free future, the government decided to halt construction on the Shin Kori 5 and 6 plants.

But critics say Moon hasn’t come up with ways to deal with possible hikes in electricity bills or how to find eco-friendly replacements for the plants. Decommissioning costs will also be expensive.

“It will cost about 2.6 trillion won [$2.27 billion] to permanently shut down the ongoing construction and it appears that it will have big impact on the regional economy,” said Hong Nam-ki, head of the Office of Government Policy Coordination on Monday. “We came to an agreement that this issue needs to be considered by the public. A special committee will select members of a panel that will decide whether to construct two nuclear reactors in about three months.”

The two reactors are 28.8 percent complete and some 1.6 trillion won has been spent on them. Construction began in June 2016. They were supposed to have the capacity to generate 2,800 megawatts of energy.

Park Maeng-woo, a lawmaker from the opposition Liberty Korea Party, argued that the decommissioning will directly and indirectly cost about 6 trillion won. He included cancelation fees for the construction, compensation for residents, the weakening of the construction industry in the Ulsan region and shortfall in taxes collected in the region.

People residing in Ulsan, where the two reactors are being built, had mixed views on the government’s decision.

“This is a big shock that the construction of Shin Kori 5 and 6 reactors will temporarily stop,” said Lee Sun-woo, who lives in Ulsan’s Seoseng neighborhood. “If construction is permanently halted, everyone residing in the region will suffer in some way.

About 100 people from Seoseng protested the government’s decision on Tuesday at Busan City Hall, saying the shutdown of the plants will reduce jobs and the area and rob them of the compensation they were to receive for allowing the reactors to be built near their homes. Regional governments that allow nuclear reactors to be built received tens of billion won as compensation. They have to return the money if construction is permanently shut down.

Kim Hyung-keun, head of a civic group against the nuclear reactors being built in Ulsan, said he welcomes the government’s decision to temporarily halt the construction. He favors a nuclear energy-free future.

Scholars expressed concerns about a committee and panel of non-experts deciding the fate of the reactors. Hong said he hasn’t decided how to select members of the panel yet.

“The construction of a nuclear reactor takes about five years, [which is a long term project designed in advance to meet the energy demand], and if the policy is poorly implemented, it can have negative impacts on energy supply,” said Chung Bum-jin, a nuclear engineering professor at Kyunghee University. “Having non-experts decide what to do with this issue is a problem.”

Lee Chang-won, a public administration professor at Hansung University, argued that it is necessary to think carefully when deciding sensitive policies about things like nuclear power plants. “I wonder if the public can understand everything that experts and stakeholders explain to them within three months.”

A nuclear engineering professor who declined to be named said there is no legally binding way to have the public decide the final solution, and that the government is playing a public relations trick to avoid taking responsibility. “Sharp changes in energy policies will create huge chaos in the country,” he added.

Some argued that hikes in electricity bills are inevitable since nuclear power plants are the most cost-efficient.

According to the Korea Hydro & Nuclear Power Corporation (KHNP), it costs 68 won for a nuclear power plant to generate 1 kilowatt per hour of energy and 73.8 won for coal power plants. The same amount of power costs 101.2 won from an LNG plants and 156.5 won from renewable energy reactors.

Currently, nuclear power plants generate 30.7 percent of the total electricity supplied in Korea. Moon plans to reduce that figure to 18 percent by 2030, and not allow constructions of new nuclear reactors.

There are currently five nuclear reactors under construction, including Shin Kori 5 and 6. Constructions of Shin Kori 4 and Shin Hanul 1 and 2 reactors are already more than 90 percent completed so it doesn’t appear that they will be shut down. But four other reactors that were planned are not expected to go ahead.

There are 24 nuclear reactors operating in the country and the lifespan of 11 will expire by 2029. The 11 reactors generate 9.1 gigawatt of energy, which is about 40 percent of the 22.5 gigawatts that all 24 reactors generate.

The government hasn’t announced plans to deal with a possible shortage of energy due to the fall in the number of nuclear reactors.

According to the Korea Electric Power Corporation (Kepco), Korea imports 96 percent of its energy.

“Some $170 billion was spent on imported energy in 2011 [in Korea], one-third of all imports,” said the World Nuclear Association. “Without nuclear power, this import bill would have been about $20 billion higher according to Kepco.”

This is why analysts believe it will lead to hikes in electricity bills.

Jung You-sub, a lawmaker from the opposition Liberty Korea Party, argued that it will cost 4.6 trillion won to generate the same amount of energy as the two halted plants through other measures such as coal, LNG and renewable sources.

“Household electricity bills will increase up to 10.8 percent, or 189,445 won a year,” said Jung in a press release. Jung said he acquired his data from Kepco and the Ministry of Trade, Industry and Energy.

However, an official from the Kepco said that was just an assumption.

Another problem with shutting down nuclear power plants is the technology to do so.

“The government estimates that decommissioning costs will be 600 billion won to 700 billion won per reactor,” said Mic Kang, Vice President and senior analyst of Moody’s. “However, KHNP will likely face the risk of cost overruns in nuclear decommissioning because the company has not had decommissioning experience and the process will require the use of complex technology.”

Last year, Kepco signed a deal with the Emirates Nuclear Energy Corporation to operate four nuclear power plants being constructed in Barakah in the United Arab Emirates. Some worry that the government’s decision will hurt exports of nuclear related technologies.

“If the government pushes nuclear free policies it might have a big impact on industries such as construction and engineering as well as research on nuclear power plant technologies,” said Noh Dong-seok, a senior researcher at the Korea Energy Economics Institute. “The government should proceed with its plan by creating a long-term road map.”

The government and civic groups have been arguing that many developed countries are going nuclear-free after the Fukushima accident occurred in 2011. But many changed their minds due to cost issues. The United Kingdom reviewed all nuclear power plant construction after the Fukushima accident but decided to raise its dependency on nuclear power after it found the plants are safe to operate.

Electricity bills soared. Now, Tokyo plans to raise its dependence to between 20 percent to 22 percent by constructing more nuclear power plants by 2030. China and Russia are also expanding their nuclear plants.