An emotional return to the stage : After a 5-year hiatus, T-ara’s long awaited comeback is finally here

An emotional return to the stage : After a 5-year hiatus, T-ara’s long awaited comeback is finally here 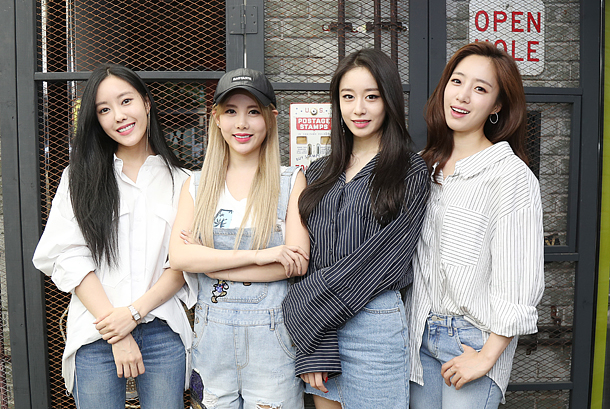 Members of T-ara from left: Hyo-min, Qri, Ji-yeon and Eun-jung. After five years without releasing new music, T-ara made their return on June 14 with their latest album “What’s My Name.” [ILGAN SPORTS]

Every artist faces difficulties throughout their career, but girl group T-ara has definitely had more rocky patches than other idol groups. Now in their ninth year, the team has gone from being sky high to hitting rock bottom, within just four years.

Then in 2012, T-ara became embroiled in controversy around the relationship between the members, as fans suspected that the original members had bullied Hwa-young, who had joined the group in 2010. Fans quickly began to turn their backs on the once-beloved stars.

After a few years away from the music industry, the group revealed yet another powerful album on June 14, “What’s My Name,” in the hopes of overcoming their past ordeal and opening up a new chapter in their career. Former members Boram and So-yeon left the group just before their big comeback in June, and the group was reorganized into a four-member team with Ji-yeon, Qri, Eun-jung and Hyo-min. The remaining members have extended their contracts until December of this year.

The following are edited excerpts of and interview with T-ara conducted by Ilgan Sports, an affiliate of the Korea JoongAng Daily.

Q. Did you feel particularly nervous about this comeback?

A. Eun-jung: [We may be] a nine-year-old girl group, but we’re still very nervous. I performed a solo song in the showcase to show [the fans] something new, but I didn’t have long to practice. I felt more nervous and excited about doing something I haven’t done in a long time - it felt complicated.

Ji-yeon: All four of us asked each other if we were feeling nervous. We felt more nervous than we did before our debut.

How did you react to the sudden change of members?

Eun-jung: We had to re-record everything and change the choreography. We tried hard to fill in the gaps. But the comeback itself was too exciting.

Ji-yeon: It’s a shame we couldn’t finish T-ara with all six of us. I feel so sorry to the fans. I think that made the two people’s [empty] places feel bigger.

Do you flow well with change?

Eun-jung: Most of the changes that came to T-ara weren’t good ones. There was a lot of gossip. So frankly we didn’t like the changes. A part of me wished that we could just go with the flow without caring about our popularity.

Have you become closer after the two members left?

Eun-jung: We’ve been through so much that we come together regardless of the number of people [in our group]. Just hearing the name T-ara gives me strength. Some people ask us “why do you keep releasing albums when no-one cares and you just get dissed all the time?” But that’s not the important thing for us. What matters is that we communicate with the fans and that we can show them our performance and be happy together.

Hyo-min: I think I want to keep the name [T-ara] alive.

Why did you cry at the showcase?

Eun-jung: I didn’t cry, because I didn’t want to hear people saying, “Oh, they’re crying again.” Our job is to stand in front of the crowd. I know that our emotions don’t get across to the public 100 percent. I think it’s best to keep a certain level [of self-control] since you can’t be perfectly understood.

Hyo-min: I didn’t want to cry where people could see me. But my emotions were hard to hide, and I just couldn’t stop myself from crying. But I want to show a smile. I want to leave T-ara smiling.

You placed first on a music program for the first time in five years. How did you feel?

Hyo-min: We really didn’t expect to win. We were really surprised to be called up. The surprise didn’t give us time to control ourselves, and tears just kept flowing. The last time was at Music Bank for “Lovey Dovey.” We were grateful back then because we received the news in Japan, but I think I will remember this more. I think this will be the last time we’ll be first.

I think I just can’t stop crying now. Even though the members promised each other that we wouldn’t cry after the showcase.

The fans liked it so much. We came out late because we were crying so much, but they were still waiting with a cake for us. I almost cried again when I saw our fans. I’m sorry to the fans that we made them cry a lot, too. We’ll try hard so that you’ll feel proud of being our fans.

What was the hardest thing about being part of an idol group for nine years?

Hyo-min: It’s hard to pick just one, actually. I think every job has its share of woes. As celebrities, it’s obvious that we struggle with other people’s attention. But it’s a job we chose, and it’s on us to bear that weight. It’s like other people who have to go to work everyday and get stressed out because of their bosses.

Do you have any regrets after having dedicated your youth to T-ara?

Eun-jung: Not at all.

Hyo-min: I’ve never regretted becoming an idol. In fact, I think it’s an honor. We were active when K-pop started gaining serious attention. I’m grateful for that.

What will become of T-ara?

Ji-yeon: We all want to keep the group alive.

Hyo-min: This isn’t just a hobby for us. There are realistic factors like our age. And it is our only job. I think we’ll have more talks and decide our future directions.