Award-winning pianist is proud to have no regrets

Award-winning pianist is proud to have no regrets 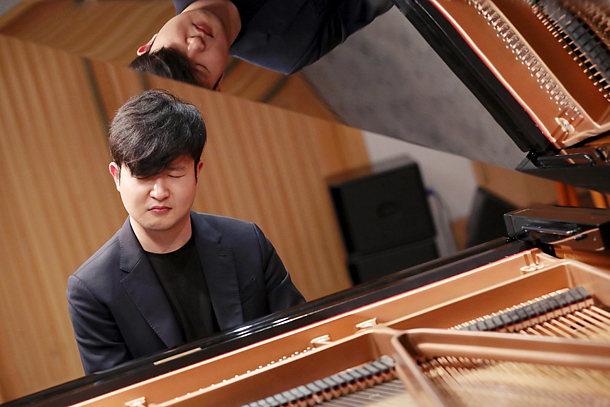 Pianist Sunwoo Yekwon performs during a press briefing at the Sejong Center for the Performing Arts on Wednesday. [YONHAP]

Pianist Sunwoo Yekwon said Wednesday that he joined a recent global competition, in which he won the gold medal, in order to not have any regrets.

At a press briefing held at the Sejong Center for the Performing Arts in Seoul, the winner of the 2017 Van Cliburn International Piano Competition said he was so grateful for the opportunities that he had so desperately clamored for.

“I’ve received a bad result from an important competition because of my laziness. This [the Van Cliburn] was probably the last contest that I could compete in due to an age limit and I joined it not to leave any regrets,” he told a group of local reporters.

On June 10, he won the globally prestigious piano competition which takes place in Fort Worth, Texas, becoming the first Korean to do so since the competition began in 1962.

The 28-year-old performed Dvorak’s Piano Quintet in A Major, Op. 81 and Rachmaninoff’s Piano Concerto No. 3 in D minor, Op. 30 in his final rounds of the competition.

In 2015, he was eliminated in the first round of the 17th International Fryderyk Chopin Piano Competition in Warsaw where another South Korean pianist, Cho Sung-jin, won.

“At that time, I was a bit big-headed. For this competition, I exercised really hard to a point where people around me worried if I could burn out even before the competition started. But I didn’t want to regret [not working hard enough] later.”

Adding that performing in the competition was a nerve-wrecking experience, he said, “When I stood up as soon as they announced I was advancing to the final round, I lurched a little bit. Being in a competition was really stressful. I tried to control myself, thinking I was there to perform, not compete.”

He studied at Seoul Arts High School and went to the Juilliard School in the United States. He has won various international classical music contests, including the Sendai International Music Competition in 2013 and the International German Piano Award in 2015.

“I want to become a sincere pianist who can share the positive feelings like happiness and comfort that I’ve experienced through music,” he said.