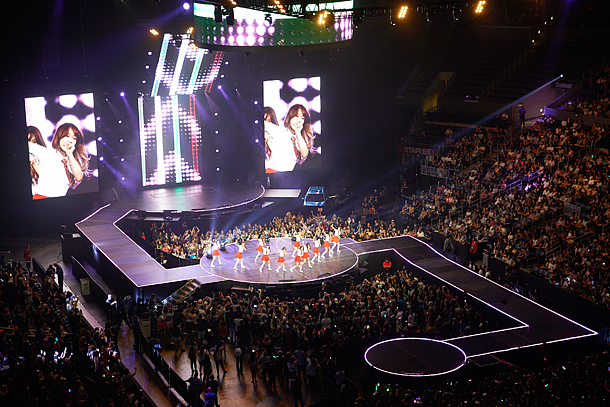 Female K-pop group I.O.I performs on stage during last year’s KCON held at the LA Convention Center in Los Angeles, California. Having just wrapped up its New York stop of this year’s KCON, top K-pop groups will once again grace the City of Angels in August. [CJ E&M]

The New York stop of the United State’s largest K-pop convention and concert, known as KCON, wrapped up last week to much fanfare. The festival which aims to bring “All Things Hallyu” to a Western audience originally started off as a one day event in 2012 with 20,000 attendees cheering on their favorite idol stars. Fast-forward four years later to KCON 2016, which reportedly garnered more than 110,000 fans in New York and L.A., proving that K-pop is growing at a fast pace in America. Although ticket sales and attendance numbers for this year’s New York stop hasn’t been revealed, big name artists such as CNBlue, GFriend, Highlight and Zion.T headlined the two-day event and promised to draw large crowds filled with their fans.

With the L.A. stop of KCON 2017 scheduled to set the City of Angels alight from August 18 to 20 with performances from Girl’s Day, Vixx and NCT 127, many are discussing the current state of K-pop and its growing influence in the United States.

“Although artists such as BoA, Rain, Wondergirls and Park Jin-young tried to tackle the American market [in the late 2000s] with their talent, it’s safe to say that they failed - not because they lacked the skill, but because they attempted to be like Western artists in the Western market,” said Lee Taek-gwang, professor of School of Global Communication at Kyung Hee University.

One of the biggest success stories of K-pop in the United States to date was the fairytale rise of rapper Psy in 2012, who grabbed the attention of Americans not by attempting to copy Western artists, but by “being himself,” according to Professor Lee.

The music video for “Gangnam Style,” released on July 2012, surpassed Justin Bieber’s “Baby” as the most-watched video in only four months after its release and was the first video to reach one billion and subsequently two billion views. It reached the feat in 684 days, and holds the record for the longest reign as YouTube’s most viewed video.

He’s not only found success on the video-sharing platform, the respective song stayed in second place on the Billboard top 100 chart for multiple weeks. He found success by not trying to incorporate Western mainstream culture, but instead showed off his “identity as a Korean. Nowhere else in the world can you see a man as goofy as Psy, but also having the talent to back it up,” said professor Lee.

The rapper’s most recent music video for title track “I Luv It” reached 8 million views in a single day and album “4X2=8” reached the 44th spot on the Billboard 200 chart on its debut.

Although many regarded this to be only a positive for Psy himself, in fact, this has propelled the whole industry of K-pop forward in subsequent years.

“[Acts like] Psy gave other [Korean] artists hope of making it big internationally by keeping things Korean. He did what Western artists can’t do, something extreme - much like how [Japanese] anime was received in the U.S. during the 80s,” said professor Lee.

This benefitted BTS, also known as Bangtan Boys, who have been having the most successful streak that a K-pop group has ever had in the U.S. The seven-member boy group released their second studio album in 2016 and it debuted in the 26th spot on the US Billboard 200.

Tickets for both American shows of “The Wings Tour 2017 BTS Live Trilogy Episode 3,” held this spring in Newark, New Jersey and Anaheim, California were sold out within hours of going on sale. Concert organizers had to add an additional date to each stop to accommodate fans.

The boy group was given the Top Social Artist Award at the 2017 Billboard Music Awards in May. They were also recognized for their influence on the internet by Time magazine, and given a spot on their 25 Most Influential People on the Internet list alongside Kim Kardashian, Rihanna and Donald Trump.

From left: Members of experimental K-pop group EXP Edition, which has received mixed reviews. K-pop fans in the U.S. welcome their favorite artists to the New York stop of KCON 2017. [JOONGANG ILBO, YONHAP]

Jaden Smith, son of actor Will Smith and actress Jada Pinkett Smith, made his intentions clear in 2016 that he wants to become a K-pop star in 2017, which he reiterated in April with a tweet which read “And Yes I will Be Dropping A K Pop Single In The Next Months.” Smith’s interest in K-pop is nothing new, as it isn’t the first time he flirted with the genre. As early as 2013, he visited the offices of mega-label YG Entertainment while promoting the film “After Earth,” to meet K-pop artists G-Dragon and CL.

While Jaden Smith has only entertained the idea of a releasing a K-pop song, there is one U.S.-based group that has already started making inroads into the industry.

That group is EXP Edition, which debuted in April with “Feel Like This.” The group’s tagline even reads “born in NY, made in Seoul.”

What started off as a social experiment by Kim Bora, a graduate school student at Columbia University, became a full-time boy group management.

“I wanted to see what would happen if I made American boys into K-pop performers, by teaching them how to sing in Korean and act like Korean boys,” Kim wrote on the official website for EXP.

However, not a lot of people are taking this fresh approach to a heavily homogenous market too kindly. The music video to their debut single uploaded on YouTube has some 20,000 dislikes, with the comments section filled K-pop fans accusing the group of cultural appropriation.

Professor Lee said, “What people need to realize is that K-pop isn’t a music genre - it’s more of a subculture. The beginning of K-pop was [about] bringing in pop culture [to Korea] and processing it through a Korean cultural lens. A fundamental part of being a K-pop group is being Korean. People are only looking at [EXP Edition] because it’s a new attempt - it won’t last long, it will only be temporary.”

Culture critic Ha Jae-keun said it could be the start of a new wave. “Because we are not a multi-cultural society, it’s just new for us. At the moment, it’s hard to say that they will be the next big thing, but if these efforts continue we could see the start of something great.”

Not your average K-pop

Conventional K-pop, made up of boy groups and girl groups gone through rigorous training at entertainment agencies, isn’t the only Korean music making it big in the land of the free. Korea’s hip-hop and R&B artists are also making big strides in the U.S. as well.

In 2015, a hip-hop track took the internet by storm. It was helped by the popular social media platform Vine. Korean rapper Keith Ape’s “It G Ma,” which roughly translates to “Don’t Forget,” became an instant hit, with many on Vine and YouTube saying, “I don’t understand what he’s saying, but it’s lit.”

American poet Henry Wadsworth Longfellow called music “the universal language of mankind” in the 19th century, and Keith Ape proved him right through his artistic vision in a language rarely understood in the United States.

On YouTube, the clip now has 42 million views and some of the biggest rappers in the U.S. jumped on a remix of the song, including A$AP Ferg, Dumbfoundead, and Waka Flocka Flame.

A rapper also tasting success in the U.S. is one of Korea’s highest paid artist in recent years, BewhY. Fresh off his win on the rap competition program “Show Me the Money Season 5,” he has collaborated with hip-hop legend Talib Kweli on “International Wave,” worked together with the “Prince of the South” rapper Big K.R.I.T. on “Uno” and worked with rapper A$AP TyY of A$AP Mob on “Like Me.”

Last year’s breakout R&B star Dean initially debuted in the U.S. with single “I’m Not Sorry,” featuring respected R&B act Eric Bellinger in 2015. This set him apart from other Korean artists who came to the U.S. after years of performing in Korea. He subsequently debuted in Korea later in the same year. He has continued to work with American artists, including R&B breakout star Gallant and L.A. based R&B artist Jeff Bernat.

Culture critic Ha said, “The music of the current rising stars is very global and very structured. They are using elements that can appease contemporary listeners all over the world.”

Ha believes that the current crop of artists have pioneering artists such as BoA, Wonder Girls and Rain to thank for their success. “The [current generation] of K-pop artists are receiving so much love due to the way these artists paved the way for them.”

When quizzed on whether K-pop will continue to succeed and grow in the manner it has, culture critic Ha and Professor Lee both answered “yes.”

“If we understand the formula of success - for example, sticking to a distinctly Korean sound - K-pop does have a chance to cement itself in American culture like Japanese anime and Hong Kong films,” says Lee.