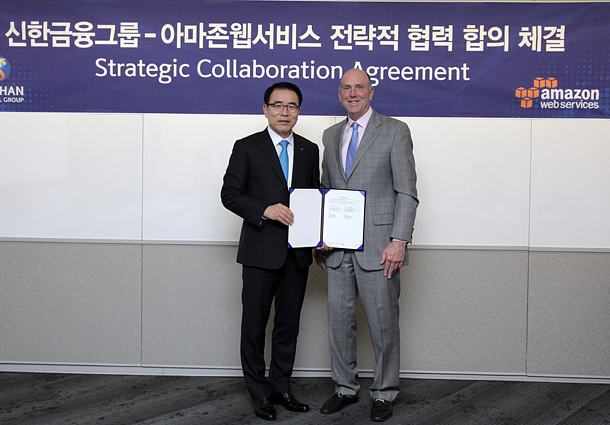 The holding group that controls the Shinhan banking, card and securities units said that the two parties will focus on building different financial platforms based on advanced technologies such as artificial intelligence, blockchain and cloud computing.

The specific terms and duration of the contract were not unveiled, but Shinhan said that the two companies will work on “a roadmap on the application of AI, blockchain and cloud computing for three to five years.”

The alliance is in line with the major initiatives that Cho proposed when he was appointed as the group head back in March.

He emphasized the necessity of digitalization, saying that the barrier between the financial and nonfinancial sectors is collapsing.

Shinhan had been on the lookout for cooperation opportunities with global tech companies since April, according to the company.

“The digitalization of finance will determine the competitiveness of financial companies,” Cho said during the ceremony on Wednesday.

Mike Clayville, vice president of worldwide commercial sales at Amazon, also reiterated the importance of technology in the finance industry.

“The pace of digital revolution in the financial industry has accelerated worldwide,” Clayville said.

The announcement is the latest in a series of partnerships between tech companies and financial institutes.

The country’s largest players in the internet and securities sectors - Naver and Mirae Asset Daewoo - have fostered a partnership to develop tech-driven financial services through the transfer of treasury shares.

The latest move came a day after Shinhan announced a reshuffle of its corporate structure.

The group created a new chief digital officer post. Woo Young-woong, executive vice president of Shinhan Financial Group, has been to the position and will oversee the digital push across the group’s affiliates.