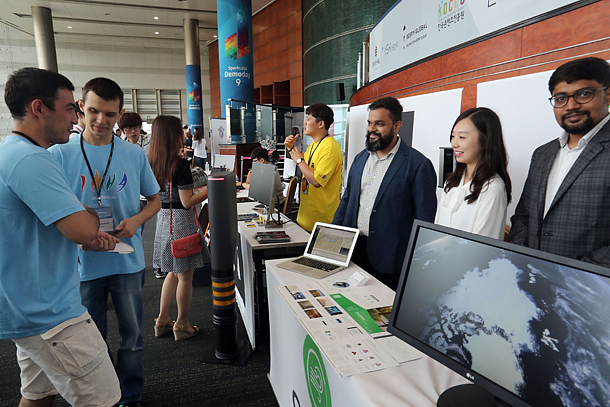 Vistors at SparkLabs’ ninth Demoday talk with business operators of a start-up at the company’s booth set up in COEX in southern Seoul on Wednesday. [YONHAP]

Start-up accelerator SparkLabs held its 9th annual Demoday on Wednesday in COEX, southern Seoul. The event presented nine companies that the accelerator has incubated in the last three months.

Accelerators are start-up investors that invest in early-stage start-ups and offer a training program for a set period of time. A demo day is an event where start-ups that have been through the program introduce their products and the progress they have made.

Wednesday’s event started with an opening speech from Lee Han-joo, co-founder and general partner at SparkLabs.

“SparkLabs started with the vision that innovation is everywhere and start-ups are at the center,” Han said in his opening speech. “The companies that debut today start small but one of them may grow big enough to represent a new generation and a whole new change.”

The nine companies that went on stage this year are based not only in Korea, but also San Francisco, California and France. Their field of business is diverse too, including new media, brain training and fashion rental services.

Amongst them, start-up Profound is a website that connects professionals in various fields like trade and advertising with companies that cannot afford consulting companies. The advice is given by phone or direct meet-ups after the client pays a fee. Having started business in September, Profound already has a pool of over 65,000 experts from 8 countries.

“People think of experts currently working in the field when they hear the word professional,” explained Lee Yu-kyung, CEO of Profound. “Our target is those retired - full of time and happy to share their knowledge, but just as competent.”

The Clozet is another company that was among SparkLabs’ selected nine. The start-up lends high-end luxury brand bags and clothes to consumers online.

Also included were Asian Boss, a YouTube media channel specializing in the Asian region, and Blend, a live chatting platform that divides the screen into half during video calls and allows users to use face-brightening filters and stickers during the conversation.

Although it was not open to the public, the incubated start-ups had a meeting with Silicon Valley investors who gave them one-on-one advice. David Lee, a Korean American angel investor and one of Forbes’ top 100 “dealmakers,” was one of four investors that participated as mentors.

“It’s all about the founder,” he said during an interview with the Korea JoongAng Daily. “Most people that turn out to run successful companies don’t even think about the hardships that can follow by doing a business because it’s something they were born to do - and that’s the type of person I want to find.

“I invest in potential, not in ideas. I need to look at somebody and understand: ‘Of all the things the person could do in their lives, why did they pick this?’ And if I can understand that, and almost fall in love with that [idea] - probably I’ll invest.”

Seoul-based SparkLabs is one of the most well-known accelerators in the Korean start-up scene. The company started with a group of entrepreneurs that have experience in both Korea and the U.S. who wanted to help local start-ups expand overseas.

Having first launched in 2012, its demo day is the biggest of its kind in Korea, in which some of the most well-known and successful start-ups in the country made their debut, including beauty commerce business Memebox and restaurant ranking app MangoPlate. The combined corporate value of all companies that have graduated SparkLabs’ acceleration program is an estimated $900 million.