Swiss education system has much to teach South Korea

Swiss education system has much to teach South Korea 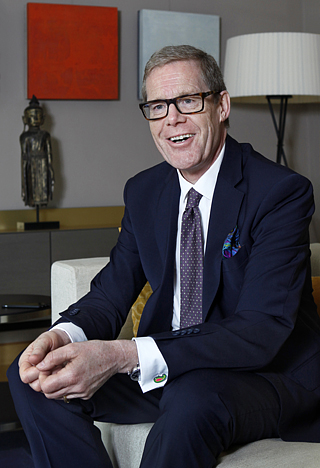 While the debate in Korea continues over alternative forms of education, especially after the recent policy proposal by the Seoul education office to abolish the independent private high school system, some parents may be interested in learning more about a type of alternative education available in Switzerland taken up by more than half of its young adults after their high school studies.

“Among high school graduates in Switzerland, some 35 to 40 percent go on to universities, while some 60 to 65 percent go through a traditional system of learning by doing,” said Swiss Ambassador Linus von Castelmur. “And this system is one of dual education, so after finishing your school, you enroll with a craftsman-entrepreneur who has a small shop, and normally the apprenticeship lasts for four years. During these years, you would work practically three days a week and go to school for two days to get the necessary theoretical skills.”

In addition to juggling alternative forms of education, Switzerland in many ways has been dealing with some of the same socioeconomic phenomena facing South Korean society, including increasing reliance on a foreign labor market for its rural economy.

The population of Switzerland, long home to refugees and immigrants, is one-fourth foreigner-born, and many of these individuals are employed in Swiss hospitality and health industries. Though in 2014 it passed a referendum to place restrictions on the number of immigrants accepted, earlier this year the country also decided to ease requirements for obtaining citizenship for third-generation immigrants.

The Korea JoongAng Daily recently sat down with the ambassador at his residence in central Seoul to discuss Swiss practices and values in education, innovation and immigration. The following is an excerpt from the interview.

A. There are two significant benefits to the apprenticeship system. First of all, youngsters may enhance their employability by getting practical skills through the system. With hands-on experience, they become more useful in the labor market and it gets easier for them to find a good job. Secondly, young people are able to achieve financial independence. There is no tuition fee for apprenticeships, and they get paid enough to start independent lives.

What exactly do the apprentices learn in their trade?

In the traditional system, kids became apprentices after nine years of school. They would become skilled craftsmen through their apprenticeships. One could choose to become a mason, for example, and learn how to construct houses. Others would practice with carpenters, cooks, electricians, accountants and hotel managers. For example, one of my nephews did an apprenticeship in accounting. After some years of practice, he took additional classes and now he is working as a senior auditor at Deloitte.

The youth unemployment rate in Korea was 10.7 percent last year, according to the OECD. Do you think some aspects of the Swiss apprenticeship system can be applied here?

In Switzerland we believe that skills are more important than certificates and that practical skills guarantee employability on the labor market. In our society, the work of a plumber or an electrician is respected and also, salary-wise, highly valued. They are indeed very well paid. There is no stigma related to manual work. Hence, the youth unemployment rate in Switzerland is low, around 4 percent according to our statistics. [The OECD statistics on Swiss youth unemployment stood at 8.4 percent last year.] However, I understand that it would be challenging for parents in Korea, many with their Confucian background, to accept that their kids do not go to a university.

Switzerland also has mandatory army conscription for male citizens. How does it work?

Conscription begins at age 18. Basic military training lasts 17 weeks. Then there are annual refresher courses a soldier must attend, a total of six, each lasting three weeks. Alternatively, after 17 weeks of basic training, a soldier can also fulfil his military service obligation by serving another 26 weeks.

A quarter of the Swiss population consists of immigrants. In 2014, Switzerland passed a referendum to place a limit on the number of immigrants to be accepted. Why?

Indeed, immigration is very important for Switzerland. From 2004 to 2012, every year immigration figures were equal to roughly 1 percent of the population. That means that roughly 80,000 foreigners moved to Switzerland every year. Although sometimes immigration is putting stress on the local population because it becomes more competitive to find a job, a flat or simply space in a train or a bus, Swiss people recognize that immigration has been a blessing for the country and its economy.

Over the centuries, Switzerland has excelled in attracting bright people. Even when it comes to enterprises, many flagship Swiss companies were founded by foreigners — one unit of the pharmaceutical company Ciba-Geigy, which was merged in 1996 with Sandoz to become the life science company Novartis, was established by a French chemist in the 19th century. ABB Group was founded by the Swiss engineer Walter Boveri and his English colleague, Charles Brown. The food giant Nestle was set-up in the 19th century by Mr. Nestle, a German pharmacist who invented milk powder.

There were a total of 1.42 million foreigners in Korea over 15 years of age last year, among whom 962,000 were employed, according to Statistics Korea. The International Organization for Migration predicts that Korea will increasingly rely on foreign workers. How much does the Swiss economy rely on foreign laborers?

As a country with strong economic performance, Switzerland has an open labor market. Our country benefited a lot from foreign labor. Especially in the very top segments of the labor market, highly qualified foreigners are significantly contributing to the prosperity of Switzerland as engineers, professors, doctors, managers or bankers with their specific types of skills, relations and networks. But it is not only this high segment of the labor market that welcomes foreign labor. For instance, in the hospitality industry and in health services in Switzerland, almost two-thirds of the nurses, attendants, waiters and room-maids come from abroad.

In Korea, many students studying basic science opt to study abroad for lack of academic resources and research opportunities here. As a citizen of a country with strong educational and research resources on pure science, like the Large Hadron Collider, how important do you think the government and corporate investment are in this sector?

There are three crucial pillars that support Swiss education: basic education, practical profession training and higher university education. The basic education system provides 9 years of education at school to every Swiss. Then through the dual vocational education and training young people may train themselves with hands-on experience and acquire professional skills. The third pillar consists of sophisticated higher education system where students get in-depth methodological skills in the fields of science and research. This higher academic system is what drives innovation in basic and applied sciences.

In Swiss society, we understand that basic science is significantly important as it lays the grounds for scientific innovation breakthroughs. In basic research, one has to understand that we may experience thousands of failures, but every failure could be productive ultimately contributing to possible fruitful results in applied science and innovation. Therefore, researchers and even investors understand that basic research requires long term efforts and investment. It is in this spirit that the researchers at the Swiss Federal Institute of Technology in Zurich and Lausanne are working. This is the reason why these two institutions rank in the top 50 among the world’s best universities. You can also get the sense of Swiss spirit when it comes to productive failures from Stan Wawrinka, a Swiss tennis player, who used a quote from Samuel Beckett’s “Worstward Ho” and tattooed it on his arm: