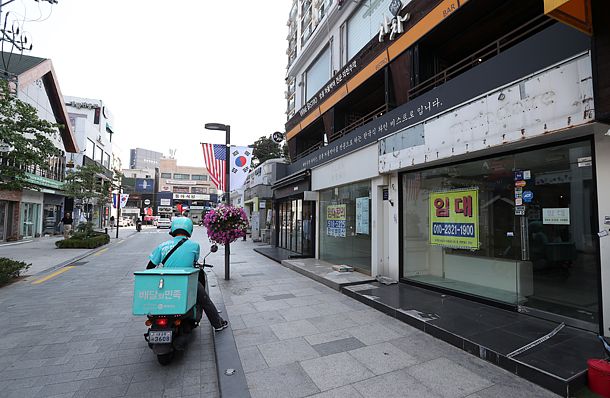 Empty streets and storefronts are a common sight at Rodeo Street in Apgujeong-dong, southern Seoul. In the past, young adults crowded the streets but now notices of “Inquiries for Rent” are affixed everywhere. Property owners have recently negotiated to lower rent costs. [WOO SANG-JO]

“Beginning in the 1980s, buildings sprang up in the water dropwort fields one by one,” said Park Jong-rok, a 72-year-old first-generation building and business owner in Apgujeong-dong, Gangnam District, southern Seoul. “The roads were packed with high-priced import cars and crowded with actors 10 years later. Another 10 years later, people began to leave and 10 after that, shopping storefronts were empty.”

Apgujeong’s Rodeo Street, which took its name from the high-price shopping street in Los Angeles’ Beverly Hills, was “the” place for young adults in the 80s and 90s. On one side of the street, Hyundai Department Store established its head office, while on the other, fashionistas found their mecca in the neighborhood of Cheongdam-dong. Soon, 70 percent of businesses in the area were clothing stores. A number of high-end cafes and restaurants also opened. Korea’s first McDonald’s debuted here in 1988, as did Korea’s first coffee bean specialist roaster, Jardin.

But today, the area has a 30 percent vacancy rate.

“Several business owners brought T-shirts from Dongdaemun (an area known for cheap clothing) that didn’t do well and easily sold them [at Rodeo Street] for 50,000 to 60,000 won ($44 to $53),” said Park. “The people here had money and there was that distinction, above all, that “I buy clothes at Apgujeong-dong.”

“It was so impressive, to the point that all ten of the country’s Porsches were on Rodeo Street,” said Song Seong-won, president of the board of Rodeo Street’s corporate body.

“In its heyday, 33 square meters would cost 4 million won a month,” said Chung Kuk-jin, an employee at a local real estate agency that has been active in the area for over 20 years, “and that’s with a deposit of 200 million to 300 million won.”

Rodeo Street’s golden age began to wane about a decade ago. Consumer spending contracted starting with the 1997 Asian Financial Crisis. Many clothing store owners relocated to places like the new Garosu-gil, Itaewon or Hongdae. Restaurants and cafes soon followed suit.

“Starting in 2005, customers dropped by half, but rent was the same,” said a 42-year-old hip-hop clothing store vendor on Rodeo Street. “As there was no further reason to stay, I put my store in order.”

“All three of my locations have had first-floor vacancies for six months now,” said one landlord. “Originally, they were all clothing stores.”

Last month, 30 or so concerned land and business owners, in cooperation with the Gangnam District Office, collectively negotiated a 30 percent reduction in rent to combat the retail flight.

“If the period of vacancy lasts longer, property values will drop and this very much goes against the interest of building owners,” said Lee Hyo-hyeon, the head of Apgujeong-dong. “There are those who can cope, but one by one, a growing numbers of business owners are negotiating a rent reduction.”