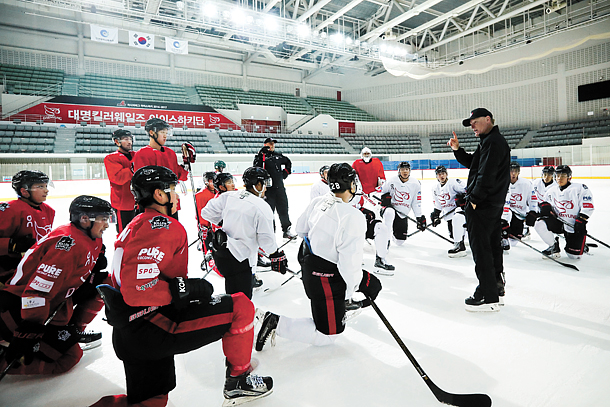 After Kevin Constantine was appointed the Daemyung Killer Whales’ new head coach on June 19, he held the first practice of the season at Incheon Asian Games Seon Hak International Ice Rink on Tuesday, wearing a hat with his initials, “KC,” asking players to call him KC rather than Mr. Constantine.

“Be a warrior,” Constantine said to the players.

Throughout the practice, Constantine actively got engaged by encouraging players and demonstrating some skills himself. Though it was only the team’s first practice of the season, when they were done, they were already exhausted.

“His first impression was pretty scary, like a tiger,” said Kim Bum-jin, captain of the team. “But outside the rink, he’s chill and easygoing.”

“If I were to compare it to football, it’s like having a manager of the Premier League team coach a professional team in Vietnam or Thailand,” said Lee Ki-wan, vice president of the Killer Whales.

During Constantine’s career as a professional ice hockey player, he played as a goaltender for the Montreal Canadiens for three seasons, from 1977 to 1980. Since he didn’t have much success, Constantine ended his career as a professional ice hockey player. But after coaching the United States men’s ice hockey team and being a head coach for the United States U-20 men’s ice hockey team, he became known for his coaching ability.

In seven seasons as head coach in the NHL with the San Jose Sharks, Pittsburgh Penguins and New Jersey Devils, Constantine recorded a total of 159 wins. Not only that, Constantine managed to lead his teams to the playoffs in five of those seasons.

But the Killer Whales are a new team, first introduced in the Asian League Ice Hockey (ALIH) in May 2016, finishing eighth out of nine. Constantine decided to accept the offer to coach the team after watching a practice video. An associate mentioned that from Constantine’s viewpoint, the players were just skating around the rink, so he decided to take them to the next level.

For the coach, it all comes down to the little details. On the first day, Constantine told his players to roll their socks up all the way so they would avoid getting blisters on their feet.

“Coach Constantine told us to say whatever for like 30 seconds when we get mad at him,” Lee Yong-jun said. “And focus on then practice again.”

When Constantine was about to leave Korea, Jim Paek, head coach of the Korean men’s ice hockey team, an old acquaintance, ran up to Constantine to meet him, as he himself just landed at Incheon from Kiev, Ukraine.

The two promised to discuss and share the team’s training information to help them succeed in the future.