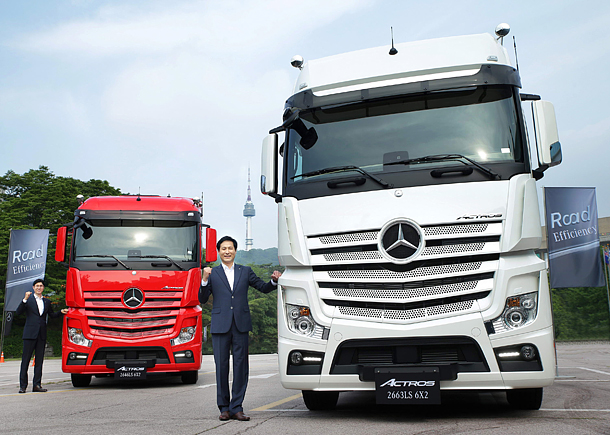 Daimler Trucks Korea, Mercedes-Benz’s commercial vehicle unit in Korea, officially introduced a new Actros to the Korean market Thursday. The company also laid out a business strategy for the year that focuses on improving after-sales service.

The first heavy duty Actros truck was introduced by Mercedes in 1996, and sold more than 1 million units over the past two decades. The latest is the fourth generation.

Among 10 variants, the 6x2 tractor version of the truck comes with a second-generation engine that boasts 530 horsepower and improved fuel efficiency by as much as 6 percent compared to the previous generation. According to the company, an owner that spent 5 million won ($4,390) each month for fuel for the previous generation would save 550,000 won with the new Actros.

The company said it will invest 10 billion won over the next three years to improve customer service.

“The vision of our company is to sell ‘trucks you can trust,’” said Cho Kyu-sang, President & CEO of Daimler Trucks Korea. “Our sales nearly doubled last year [compared to 2015] and as a result, Korea was the third-fastest growing market among any markets overseas. Now, it is time for us to focus on qualitative growth.”

To improve the quality of the customer experience, Cho emphasized “Road Efficiency” as a key strategy. A key component of that is safety.

“Even with high fuel efficiency and excellent driving skills, all of our effort to maximize efficiency and minimize the cost [of ownership] could come to nought with just one accident,” Cho said.

Cho added that a predictive powertrain control featured in the new Actros is an example of how the company can help drivers avoid accidents.

A predictive powertrain control is a system that automatically scans the road ahead using GPS data and 3-D mapping, the company said.

The vehicle controls the shifting of its own gears to maximize fuel efficiency.

“Also, by adopting an advanced maintenance process, we hope to expand the quality of the overall customer experience,” Cho said.