Hollywood finds opportunity in Korea: While local filmmakers and actors have made major strides in the world’s most influential market

Hollywood finds opportunity in Korea: While local filmmakers and actors have made major strides in the world’s most influential market 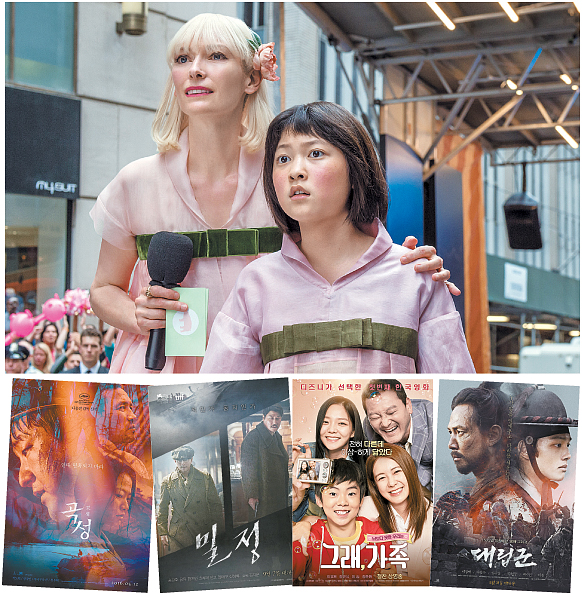 Top: Director Bong Joon-ho’s “Okja,” which was released worldwide on Netflix and in local theaters on Thursday, was fully financed by American streaming giant Netflix. Above: Hollywood studios have become more enthusiastic about working on Korean releases. From left to right are “The Wailing,” “The Age of Shadows,” “My Little Brother” and “Warriors of the Dawn.” [NETFLIX, 20TH CENTURY FOX KOREA, WARNER BROS. KOREA, THE WALT DISNEY COMPANY KOREA]

Korean auteur Bong Joon-ho made headlines two years ago when Netflix announced that it would cover the entire $50 million budget of his next movie, “Okja.” It was the first attempt by the American streaming giant to invest such a large budget into a film from a Korean director. Though the action blockbuster, about the friendship between a young girl and a super-pig, drew controversy for its limited theatrical release, it was honored to compete at the 70th Cannes Film Festival last month.

“We invested in this movie because it’s a great project... it’s very heart and soul is Korean, but it’s a global movie. It’s a [world of Bong Joon-ho’s creation,] transcending language and culture,” Ted Sarandos, chief content officer for Netflix, said during a press event held in Seoul last month.

Such cultural exchange between Korea and the U.S. in the entertainment industry has become more active over the years.

Hollywood studios have begun working on Korean movies over the past few years, with some of them having shown strong determination to increase the number of Korean releases.

From top to bottom: Soo-hyun in “The Avengers: Age of Ultron,” Lee Ki-hong in “The Mayor” and Lee Byung-hun in “The Magnificent Seven.” [THE WALT DISNEY COMPANY KOREA, SHOWBOX, UNIVERSAL PICTURES INTERNATIONAL KOREA]

One of the most active American entertainment behemoths to set foot in the Korean movie industry is 20th Century Fox.

The studio produced and distributed the Korean movie “Warriors of the Dawn” last month - only one year after the entertainment behemoth’s Korean production, “The Wailing.”

The most successful Korean movie by FIP so far is last year’s mystery thriller “The Wailing.” Directed by Na and starring Gwak Do-won, the movie was a box office hit with an impressive 6.88 million tickets sold.

During his visit to Korea in May 2016 ahead of the release of “The Wailing,” president of FIP Tomas Jegeus said that the production company planned to make “probably two films to maybe even up to three to four films a year” in Korea.

Warner Bros. is another Hollywood Studio that has made inroads into Korean film industry. Their first Korean-language project was last year’s period drama “The Age of Shadows,” which sold 7.5 million admissions.

The Walt Disney Company Korea has also jumped into the market, picking up family drama “My Little Brother” for local distribution in February.

Regarding the reasons behind Hollywood studios’ expansion in Korean film industry, culture critic Lee Taek-gwang said, “Korea has a very large movie market in terms of theatrical releases. [In the U.S., the entertainment industry] revolves around TV series and people mostly watch movies at home instead of heading to theaters... Korea is also a market that [Hollywood studios] set foot in ahead of their long-term goal of reaching out to the Chinese market.

“It is very likely for the U.S. and Korean film industries to form deeper relations in the [future,]” Lee added, explaining further that cultural relations between the two countries has surpassed simple cultural exchange, and has developed into something further: industrial exchange. Lee describe this relationship as “very intimate.”

Actor Park Joong-hoon made headlines in Korea 20 years ago when he was confirmed to star in Hollywood action movie, “American Dragons.” Park was once again the center of attention in 2002, when he was cast for another Hollywood film, “The Truth About Charlie.” Though both films failed to achieve commercial success, Park’s roles in Hollywood were refreshing news in Korea.

Since then, other Korean actors have followed, making appearances in American films and TV series, with some even successfully nabbing lead roles.

Singer-turned-actor Rain starred in the 2009 American-German martial arts thriller “Ninja Assassin.” In the 2008 action-comedy “Speed Racer,” Rain played a rookie racer, while he pulled off a vicious killer in the 2014 American gangster thriller “The Prince.”

Actor Lee Byung-hun has been one of the most active Korean actors in Hollywood, playing the ninja Storm Shadow in “G.I Joe” franchise, a shape-shifting prototypical Terminator T-1000 in “Terminator Genisys” (2015) and, most recently, the knife-wielding Billy Rocks in the remake of the classic western film “The Magnificent Seven.” Korean-American actor Daniel Henney, who made his on-screen debut in the 2005 Korean series “My Name is Kim Sam Soon,” has extended his career to the U.S., with his most notable role in the TV series “Criminal Minds: Beyond Borders” (2016-17).

Outside of action-packed movies, Korean actors can also be found in a number of genres throughout U.S. entertainment. Kim Yun-jin broke through on the TV series “Lost” (2004-5), in which she played the daughter of a powerful Korean businessman and mobster. Kim made herself a household name in the U.S. on the TV drama “Mistresses,” which kicked off its first season in 2013.

Bae Doo-na, who made her presence felt to international audiences through the 2006 sci-fi thriller “The Host,” played a lead role in the Netflix-produced drama “Sense 8,” which wrapped its second season in May. And Soo-hyun, who also goes by Claudia Kim, surprised local audiences when she was cast in Marvel’s “The Avengers: Age of Ultron” (2015) as a scientist. She is also set to work on a new Hollywood film, “The Dark Tower.”

Korean-American actors who first made a name for themselves through major roles in American films and television shows, have begun to make appearances in Korean films. Lee Ki-hong, best known for his role in “The Maze Runner” series, recently appeared in the Korean movie “The Mayor,” released in April. And Steven Yeun, best known for zombie series “The Walking Dead,” also took part in “Okja.”

Seeing Korean locales in Hollywood movies is no longer uncommon. Marvel Studios’ “The Avengers: Age of Ultron” (2015) chose Korea as one of the film’s locations, and audiences were introduced to spots like the Mapo Bridge in western Seoul and Some Sevit, an artificial island on the Han River. Marvel returned to Korea earlier this year to shoot some scenes of its upcoming superhero feature “Black Panther.”

Though it remains yet unknown what will appear in the film, Marvel reportedly used the southern port city of Busan as the backdrop for a huge car chase scene and gun battles.

A few other movies that showed scenes in Korea include the thriller franchise “The Bourne Legacy,” (2012) “Colossal,” which was released in April, and the second installment of the sci-fi monster franchise “Pacific Rim: Uprising,” slated to hit theaters next year.

“It is part of [Hollywood’s] efforts to develop a new market,” said culture critic Oh Dong-jin. “Audiences have seen Tokyo and Shanghai many times [in Hollywood movies], and therefore, cities in Korea can be perceived as refreshing.”