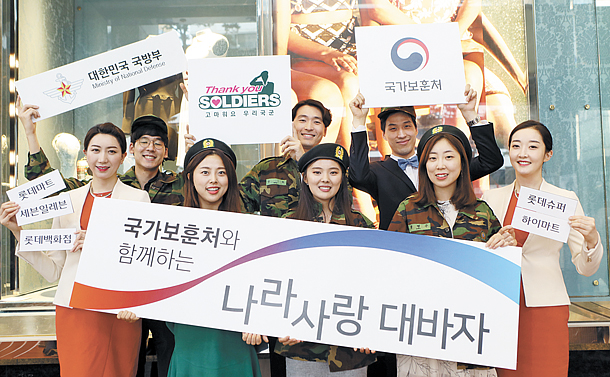 South Korea’s retail giant Lotte Group launched the “I Love My Country” campaign to coincide with the Month of National Patriots and Veterans. The profit earned from the campaign goes to support the medical expenses for men of national merit and honor. [LOTTE]

This month, Lotte strives to inspire people to pay attention to the noble sacrifices made by Korea’s patriots and veterans of the past and also the efforts of modern soldiers who are sacrificing their lives to serve our nation and protect us. Aiming to honor their efforts and help people recognize the month of national patriots and veterans, Lotte launched a campaign under a theme of “I Love My Country” that accompanies a huge sales promotion.

Under the theme of “I Love My Country,” Lotte launched a campaign for people of national merit and their families. Its profit earned from this campaign is donated to help men of national merit with their medical expenses. Lotte Department Store, the retail unit of Lotte Group, offered discounts on a total of 200 brands at 31 locations from June 23rd to 28th.

Under its “Thank You for Your Service, Military Service Members” campaign, Lotte has coordinated with the Ministry of Patriots and Veterans Affairs to encourage people to recognize and appreciate those serving in the military. The campaign was launched at its retail outlets in the hope that this integrated effort would create a synergy when promoting appreciation for those serving the country.

Previously, Lotte has seen success with a distribution integrated promotion that encompasses its entire affiliates. For example, the Lotte Grand Festa that commemorated the opening of Lotte World Tower and the 50th anniversary of Lotte in association with Lotte Department Store and all its affiliates reaped a successful outcome in its total sales.

Lotte hopes to have the same result for its first distribution integrated campaign for CSR activity. Through the campaign “I Love My Country,” Lotte hopes to successfully spread its purpose, which is to promote appreciation of the sacrifices that soldiers make and to encourage those serving in the military today. All 11 affiliates of Lotte retail, including Lotte Department Stores, Lotte Mart, Hi-Mart, Lotte.com, Seven Eleven, and more have participated in this campaign.

The efforts to promote the campaign extended online as well. Lotte posted on its Facebook page (www.facebook.com/LOTTE) and other social media platforms inviting people to send encouraging messages to soldiers serving our country. Free coffee was offered to those who provided responses.

Executives of each affiliate plan to visit to the army installations and deliver supplies, including LED TVs, washing machines, and other consumer electronics products.