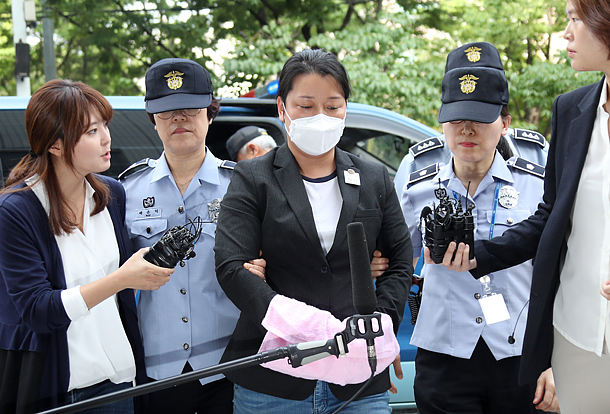 Lee Yoo-mi, a member of the People’s Party who confessed that she fabricated the tape recording and SNS text messages to smear Moon Jae-in, the presidential candidate of the Democratic Party during the presidential campaign last year, is taken into the Seoul Southern District Court for a detention warrant review on Thursday. [YONHAP]

A local court on Thursday held a session to consider a request for a pre-trial detention warrant for Lee Yoo-mi, a member of the People’s Party who is accused of having made a fake audio tape to harm President Moon Jae-in’s reputation.

The session, held by the Seoul Southern District Court, lasted from 10:30 to 11:10 a.m., with Lee and her lawyer and prosecutors present. While the court has yet to decide on the matter as of press time Thursday, it was expected it would issue the warrant.

On the tape, an alleged student of Parsons School of Design graduate and friend of Moon’s son, Moon Joon-yong, claims Joon-yong landed a full-time job at the Korea Employment Information Service (KEIS) in late 2006 because his father was senior presidential secretary for civil affairs.

Moon Joon-yong studied design and technology at the Parsons School of Design in 2010.

Lee Yoo-mi allegedly made the tape, using her brother in the role of school friend, before giving it to Lee Jun-suh, a former supreme council member of the People’s Party, who in turn handed it to the Ahn Cheol-soo campaign headquarters.

The issue has become the biggest political scandal for the party of 40 lawmakers, whose presidential candidate, Ahn Cheol-soo, was defeated by Moon in the May 9 election. As Lee Yoo-mi was anticipated to be detained for further questioning, prosecutors will focus on finding out whether senior members of the party were involved, such as by telling Lee to produce the tape.

The prosecutors are also considering the possibility that the Ahn camp went ahead with a press briefing on May 5 to disclose the material even though they may have known it was fake.

The People’s Party has been trying to distance itself from Lee, saying it was her plan and hers alone. Lee Jun-suh is barred from leaving the country and will be called in for questioning in the coming days.

Rep. Lee Yong-ju of the People’s Party, a former prosecutor who led the fact-finding committee for the Ahn campaign, said Wednesday that he had learned from Lee Yoo-mi’s lawyer that Lee had testified to the prosecutors that she acted alone.

Rep. Lee’s account was, however, contradicted by the lawyer on Thursday, who told reporters after the court session that his legal team had never shared anything related to Lee’s case to anyone.

Meanwhile, Ahn Cheol-soo remained silent on the matter as of Thursday, leading many within the party to criticize him over what they see as his irresponsible manner as the former party standard-bearer.

“A leader has to take responsibility for a group that ran its campaign for him,” said Kim Tae-il, chairman of the party’s innovation committee, in a radio interview with TBS. “It is the wish among party members that he stands up to show his leadership to weather this crisis.”