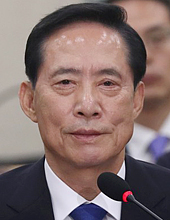 The opposition parties on Thursday remained firm in their objection to Song Young-moo, the defense minister appointee, who is in hot water over a range of issues regarding his ethical conduct.

The ruling Democratic Party and opposition parties were scheduled to hold a parliamentary defense committee session to decide whether to adopt a confirmation hearing report on the former Navy Chief of Staff, who has been tapped by President Moon Jae-in to lead the military. But with protests by the opposition, the session was called off without scheduling another.

Moon’s choice of the former Navy general was seen a sign of his resolve to reform the military as Song hails from the Navy, not the Army, which has long dominated the top ranks of the military. The former four-star general is known for his progressive military agenda and interest in rights issues.

With no schedule fixed for the next defense committee session, Song’s fate hangs in the balance while Moon is in Washington preparing for his first summit meeting with U.S. President Donald Trump.

There are a number of issues that the opposition parties cite to judge the former general unfit to serve as the top military man. One of them is his 1991 record of driving under the influence. The document shows his blood alcohol level was 0.11 percent, a figure that would nullify a driver’s license today. The opposition went after the nominee because Song failed to state his DUI record in documents submitted to the committee in pre-hearing, raising suspicion that he had tried to conceal his misconduct.

While apologizing for this, calling it a “foolish act in youth,” Song denied he had tried to hide the DUI record and said the case was transferred to the military police and did not lead to criminal prosecution.

Another point of contention is the huge sum of money the nominee earned in his post-military career working as an adviser for a law firm and a defense industry company. It was revealed that he had made nearly $1 million over a three-year-period, prompting the opposition to describe him as being obsessed with money.

“Who would anyone follow his order as defense minister when he is someone who threw away honor in the Navy and went out for profits only?” asked Bareun Party floor leader Joo Ho-young. “I urge Song to make a swift decision [to withdraw himself from consideration].”

The Liberty Korea Party (LKP) and the People’s Party agreed, calling Song unfit for the position. The ruling Democratic Party stands as the only one still behind Song, urging the opposition to hold the military committee session to adopt the report so that the military could have a new leader.