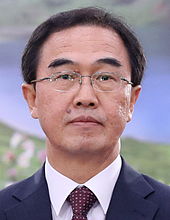 Cho Myoung-gyon, who passed a parliamentary hearing Thursday to become unification minister, expressed optimism about sending a special envoy to North Korea for dialogue with the regime, saying it was “something to think positively about.”

The remarks were made in a confirmation hearing at the National Assembly, when Rep. Won Hye-young of the ruling Democratic Party raised the idea and asked Cho for his opinion.

Citing previous cases, Won said the gesture could lead to a “turning point” in efforts to improve inter-Korean relations and solving the North Korean denuclearization issue, to which Cho responded, “I agree.”

Asked by Rep. Yoon Sang-hyun of the opposition Liberty Korea Party whether South Korea would talk with the North on the condition that it refrains from any additional nuclear or missile testing, a suggestion laid out numerous times by President Moon, Cho answered that Seoul would resume dialogue with Pyongyang if a test freeze was “headed towards a nuclear freeze and denuclearization.”

The “basic purpose” of former President Kim Dae-jung’s Sunshine Policy of engagement with the North “should be sustained,” said the veteran North Korea policymaker, distancing himself from the hawkish ways of the former Park Geun-hye administration.

On concerns that the Moon Blue House was in discord with U.S. President Donald Trump’s policies on Pyongyang, Cho said the two sides still had a “lot in common” in dealing with the North, and that they could “implement [each of their North Korea policies] in harmony.”

Trump’s four-point strategy on North Korea includes not recognizing it as a nuclear state, imposing sanctions, not seeking regime change and resolving the problem with dialogue. Moon’s double-track approach to Pyongyang is hinged on pressuring the regime to give up its nuclear weapons while seeking dialogue and promoting cooperation at the private sector level.

Trump is open to talks but only on the condition that North Korea fully denuclearizes.

“There’s a very small chance North Korea will denuclearize,” said Cho, “but if we try hard, we can lead them towards that direction.”

On the possible reopening of the Kaesong Industrial Complex, Cho said it was a “meaningful project” but it’s “too early” to reopen at this point.