Growth forecast will not be raised

Growth forecast will not be raised 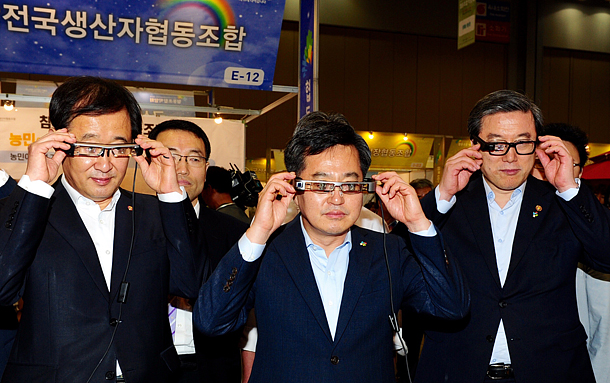 Korea’s finance minister said Friday that he has no immediate plan to raise the current economic growth forecast of 2.6 percent, despite an uptick in exports and world trade.

“If the supplementary budget is approved and implemented in a timely manner and we see its effect, the growth rate can probably go up,” Finance Minister Kim Dong-yeon told reporters after an event held in Goyang on the northern outskirts of Seoul.

The government submitted an 11.2 trillion won ($9.8 billion) extra budget earlier this month to the National Assembly, though parliament has yet to review it due to a political standoff.

“But we have to review it carefully, given a rate hike in the United States and spreading trade protectionism,” said Korea’s top economic policymaker.

“We’re not considering adjusting the current growth forecast at this moment,” Kim added.

The finance ministry earlier estimated that Asia’s fourth-largest economy would expand 2.6 percent in 2017, down 0.2 percentage point from the previous year’s 2.8 percent.

In recent months, many think tanks and global investment banks revised up their growth forecasts for the Korean economy to around 2.8 percent, citing brisk exports led by recovering global demand.

Korea’s exports, a key economic driver, gained ground for seven straight months since November last year, with the numbers posting double-digit growth from February through May.

The strong growth is largely due to stellar overseas sales of semiconductors, steel and petroleum products as rising oil prices buoyed demand from emerging markets.

In the first quarter of 2017, the country’s gross domestic product rose 1.1 percent, marking the highest since the third quarter of 2015.

But some observers noted that the speed of global demand may slow to some extent as oil prices have started to move downwards and as the U.S. tightens its monetary policy.