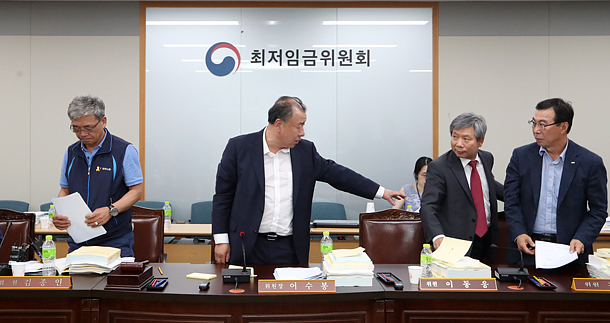 From left: Labor representative Kim Jong-in of the Korean Confederation of Trade Unions, Minimum Wage Commission Chairman Soo-bong and business representative Lee Dong-eung of Korea Employers Federation leave after members failed to reach agreement on next year’s minimum wage at the Ministry of Employment and Labor office in Sejong on Thursday. [YONHAP]

National representatives of companies and labor failed to reach agreement on setting next year’s minimum wages, largely because of the unpreparedness of the corporate side.

Despite six meetings and the labor representatives returning to negotiations after walking out nearly a year ago, the two sides continued to clash over raising the minimum wage to 10,000 won ($8.74) per hour, a promise President Moon Jae-in made during his campaign.

As a result, the review to set a minimum wage for next year passed its legal deadline, which was on Thursday.

The labor representatives asked to open the talks to the public or to hold a public discussion on the issue. Management insisted on applying different minimum wages to different industries.

On Wednesday, Minimum Wage Commission Chairman Uh Soo-bong tried for a compromise. As the labor representatives demanded, Uh proposed opening the discussion to the public twice a year - one time in the first half of the year and another in the second. He also said he will be holding more than two public briefings on the negotiation process.

That was interpreted as giving management negotiation homework.

Different minimum wages by industry has been a corporate demand since the Roh Moo-hyun administration.

But according to a Minimum Wage Commission official, when chairman Uh asked for more specific details on how to do that, representatives of the corporate sector were shocked because they weren’t prepared.

A wide analysis would be needed that included the management situation of each and every industry, plus for self-employed entrepreneurs such as restaurateurs. Data on current labor situations, wage structures, welfare status and social safety nets would also be needed.

“[We] have made a continuous demand for the need to diversify the minimum wages accordingly to industry and to different businesses and prepared specific plans,” said Kim Dong-wook, head of Korea Employers Federation PR office.

However, such specific plans have never been produced by the business representatives in negotiations.

The corporate sector’s negotiating team held an emergency meeting in Sejong City on Thursday, which failed to reach a conclusion.

“Because there is such a variety of different businesses, there are different opinions even among ourselves,” said Kim Moon-sik, a representative of the Korea Oil Station Association.

Although the representative of the Korea Employers Federation is in charge of fine tuning the different opinions of business sectors for the minimum wage commission, it is currently worried about possible clashes with the Moon Jae-in administration.

The business community’s faith in the lobby group has been diminished, making it more difficult for the Korea Employers Federation to accomplish its job.

“At a time when relations between labor and the government are stronger than ever, simply repeating its previous stance without any preparation was the business side’s biggest mistake,” said a government official on the Minimum Wage Commission.

The meeting started at 3 p.m. Thursday. Management representatives failed to come up with specific plans to apply different minimum wages for different industries.

Uh warned the corporate representatives that if they failed to come up with a counter proposal, it would vote on the union’s proposal to raise the minimum wage to 10,000 won per hour.

The minimum wage for the following year is determined by a majority vote by the 27 members of the commission. Labor, business and the government each have nine seats on the commission.

The final announcement for next year’s minimum wage will be announced on Aug. 5.