President will fly 2 stolen royal seals back from the U.S.

President will fly 2 stolen royal seals back from the U.S. 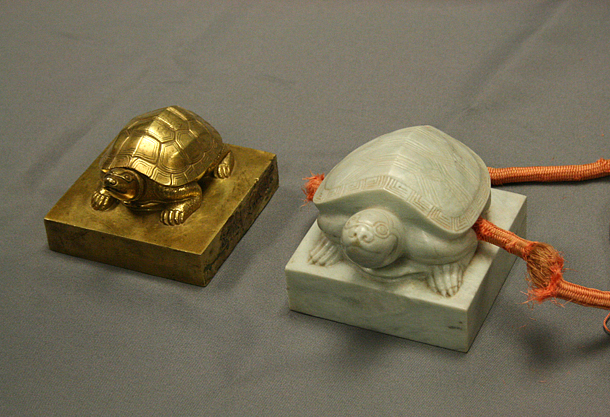 Two Korean royal seals, the Royal Seal of Queen Munjeong, left, and the Royal Seal of King Hyeonjong, right, will be flying in on the presidential plane today, coming home decades after they were illegally taken from the country. [CULTURAL HERITAGE ADMINISTRATION]

Two ancient royal seals will be coming back to Korea from the United States decades after they were illegally taken from the country during the 1950-53 Korean War.

The two seals of the Joseon Dynasty (1392-1910) - the Royal Seal of Queen Munjeong and the Royal Seal of King Hyeonjong - will be coming home aboard the presidential plane with Moon Jae-in, who heads back to Seoul from his first trip abroad as president on Saturday.

According to the Cultural Heritage Administration (CHA), a ceremony to transfer the royal seals, or eobo, was held at the Korean Embassy in Washington on Friday at 11 a.m. local time. In early June, the CHA announced that it had completed all procedures to bring back the two eobo with the U.S. Immigration and Customs Enforcement.

The eobo are presumed to have been illegally carried out of the country during the Korean War. The Royal Seal of Queen Munjeong, a gilt bronze seal that was made in the second year of King Myeongjong in 1574 to honor Queen Munjeong (1501-1565), was rediscovered when the Los Angeles County Museum of Art acquired it from Los Angeles-based collector and dealer Robert Moore in 2000. CHA said it reported the Royal Seal of Queen Munjeong as stolen to the U.S. Department of Homeland Security in May 2013 and requested a formal investigation into the matter.

“It has not been made official, but as we understand it, Moore obtained the two seals at an auction in Japan and took them to the United States,” said an official from CHA. “Since we never sold the royal seals, we regard all lost royal seals as stolen.” But details on how the seals left Korea are unclear, the official added.

CHA requested another investigation into the Royal Seal of King Hyeonjong in July 2013 from the U.S. Department of Homeland Security. It seized the two seals in September 2013.

When the two eobo make it back to Korea, CHA said it will show them to the public at a special exhibition at the National Palace Museum of Korea, possibly in August.