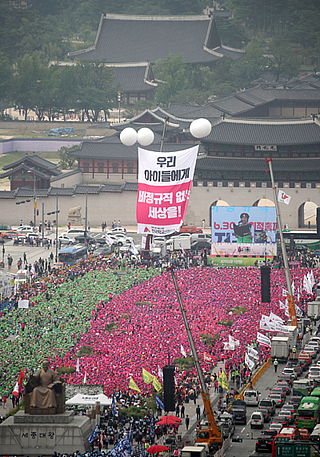 Tens of thousands of labor union members stage a rally in the Gwanghwamun area in central Seoul on Friday afternoon to demand an increase to the minimum wage and to transform irregular contract workers into regular salaried workers. [YONHAP]

The labor unions’ major street protest, calling for improved working conditions and an increase in the minimum wage, was held in central Seoul on Friday, drawing some 400,000 demonstrators.

People holding signs that call for turning the status of temporary workers to permanent ones and raising the minimum wage to 10,000 won ($8.7) per hour began to crowd Gwanghwamun Square in central Seoul on Friday, the same venue where tens of thousands of people gathered every Saturday for the entirety of the last winter, calling on former President Park Geun-hye to step down, which she was forced to do in March.

The Korean Confederation of Trade Unions (KCTU) led the 400,000 member rally by putting its officials on stage to chant slogans such as “Let’s make a 10,000 won minimum wage!” and “For rights to strike!”

“The minimum hourly wage of 10,000 won is the amount deserved by every laborer in this country,” said Choi Jong-jin, acting chairman of the KCTU on stage before the demonstrators who filled up the square. “And it is the demand of 10 million people on short-term labor contracts for a status transition into long-term workers.”

The KCTU characterized the Friday rally as “social strike” to emphasize that it was about improving social conditions for the marginalized, such as temporary workers who suffer from much lower wages compared to regular workers, despite the fact the work they do is often the same.

Among the protesters were some of the 14,200 cafeteria workers of public elementary, middle and high schools through out the country who went on a two-day strike from Thursday demanding a raise in pay and transformation of all temporary contracts to permanent contracts, forcing nearly 2,000 school cafeterias out of service.

The same gap in salary between long-term and short-term workers on temporary contracts can be found in other industry sectors, a phenomenon that experts say contributes to widening social polarization.

The protesters began marching toward Jongno 3-ga Station at around 4:20 p.m. To ensure a peaceful rally, some 6,000 police men were dispatched. No scuffles or injuries were reported as of press time Friday. Some criticized the KCTU for going ahead with the strike, given that President Moon Jae-in is considered pro-labor and it has been less than two months since the new government was sworn in.

Moon asked labor unions to refrain from going on strike at a Blue House meeting on May 23 to mark the launch of a special committee on job creation, asking for one year to come up with policies to address their demands. The group of labor unions rebuked Moon’s request and went ahead with Friday strike, demanding that the government move faster to answer their demands in its “golden time,” or first year.

The Friday rally was held a day after the KCTU also hosted a small-scale rally to mark the eve of the strike on the road in front of the Blue House, the closest point to have a rally to the presidential office.