Moon, Trump have an amicable first encounter in welcome dinner

Moon, Trump have an amicable first encounter in welcome dinner 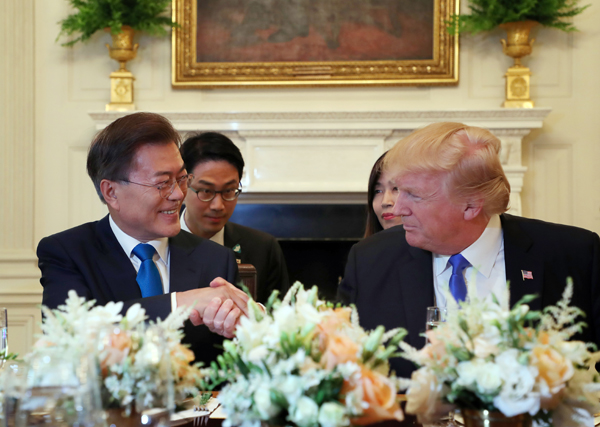 WASHINGTON - President Moon Jae-in and U.S. President Donald Trump met Thursday for the first time since they both took office earlier this year for a dinner at the White House to mark the Korean leader’s visit.

The welcome dinner was hosted by the U.S. first couple and Moon attended with his wife, Kim Jung-sook. Senior officials from both countries also joined.

The dinner marked the first meeting of Moon and Trump, and the U.S. leader told his Korean counterpart that he wants to discuss North Korea and trade between South Korea and the United States.

"We're going to have tremendous discussions tonight. I know you've been discussing with our people some of the complexities of North Korea and trade and other things, and we'll be discussing them all as we progress - and it could be very well late into the evening," Trump said at the start of a White House dinner with Moon, according to a pool report.

"It was a great victory, and you did a fantastic job," Trump said. "A lot of people didn't expect that, but I did expect it. I thought that was going to happen. So I want to congratulate you very much."

According to the Blue House, a presidential dinner during a Korean president’s visit to Washington was the first in 11 years. The last dinner was between President Lee Myung-bak and U.S. President Barack Obama.